Prof. Balazs Halmos (Albert Einstein College of Medicine and Montefiore Medical Center, USA) presented a study on the choice of taxane and KEYNOTE-407 outcomes. His presentation was part of a mini-oral abstract session on real-world considerations in immunotherapy. It focused on an exploratory analysis of data by investigators’ choice of paclitaxel (60.1% of patients) or nab-paclitaxel (39.9% of patients).

KEYNOTE-407 was a phase 3, randomised, double-blind clinical trial in patients with advanced, untreated squamous cell carcinoma [4]. Key eligibility criteria were an ECOG of 0-1, available tissue sample for PD-L1 testing, no symptomatic brain metastasis, and no pneumonitis requiring systemic steroids. Other than a higher percentage of East-Asian patients treated with nab-paclitaxel, baseline characteristics between the two groups were well balanced. They were stratified by choice of taxane, region of enrolment (Eastern Asia vs the rest of the world), and PD-L1 tumour proportion score. OS in the pembrolizumab arm was significantly better than placebo regardless of choice of taxane [Figure 5]. The HR in the paclitaxel group was 0.67 vs 0.59 in the nab-paclitaxel group. However, Dr Halmos noted that although survival appeared to be numerically better in both arms for the nab-paclitaxel patients, confidence intervals were wide and overlapped. 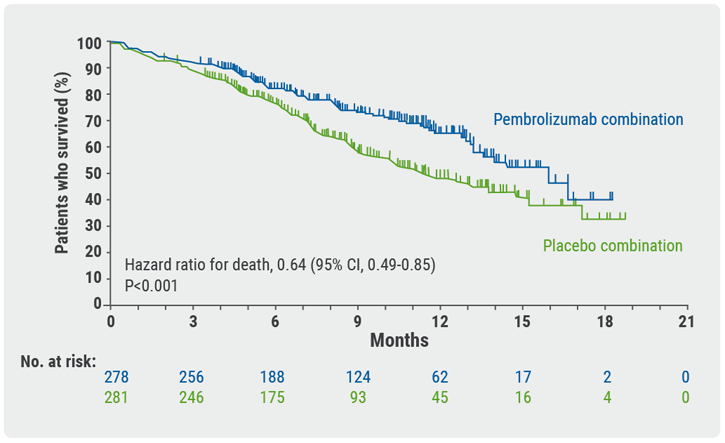 Progression-free survival benefits were also significantly better. The HR was 0.52 in the paclitaxel cohort and 0.65 in the nab-paclitaxel patients. The addition of pembrolizumab to chemotherapy boosted ORR by about 20% in both groups.

According to Dr Halmos, the findings demonstrate significantly improved overall survival, progression-free survival, response rate, and an acceptable safety profile regardless of taxane choice. “Our data clearly support the addition of pembrolizumab to carboplatin/taxane-based doublet chemotherapy for first-line management of advanced squamous cell NSCLC,” he said.