Malignant pleural mesothelioma (MPM) is an aggressive and highly lethal cancer. Combined treatment with two cancer immunotherapy drugs significantly prolonged survival in mouse models of MPM [1]. Recent findings from The Cancer Genome Atlas Research Network provided both a rationale and a biomarker for clinical trials of emerging anti-VISTA immunotherapies [2]. Use of high-throughput technologies to characterise the genomic and epigenetic landscapes of mesothelioma may drive advances in novel clinical treatments [3].

“There are lots of needs in the surgical management of mesothelioma,” said Dr Valerie Rusch (Memorial Sloan-Kettering Cancer Center, USA). She cited many opinions, only modest amounts of data, and even less standardisation.

The minimal acceptable standards for optimal biopsy and staging are controversial, said Dr Rusch. Questions center on whether surgical biopsy (VATS) is always required and how many sites should be biopsied to account for tumour heterogeneity. There are two approaches to staging, she said, minimalist (CT ± PET) or maximalist (CT, PET, MRI, EBUS, mediastinoscopy, laparoscopy). Dr Rusch noted a tendency toward the use of less extensive testing, even at cancer centres with longstanding maximalist traditions. Patient selection for macroscopic complete resection is another controversial subject.

“In this community and among surgeons,” said Dr Rusch, “opinion is fairly strong that patients with pure sarcomatoid histology should probably not undergo surgical resection.” She said that work by the IASLC multidisciplinary group to revise histology subtypes might help resolve disagreements.

Selection of patients based on extent of disease is also in dispute. While some surgeons say that they’ll never operate on patients with identified lymph node metastasis, many others do not hold that view. “There’s certainly no agreement as to which patients should not be considered for surgery,” said Dr Rusch.

She also noted enormous discrepancies between current clinical and pathological staging for CT vs PET. “There’s no clear way to discriminate by tumour status alone,” she said, adding that revision of tumour categories for the 9th edition might help.

She also said that continued investigation into other ways to classify patients (e.g. by pleural thickness) will be very important. Other areas in need of clarification include surgical definitions and standards [4] as well as standards for surgical resection (AJCC Cancer Staging Manual, 8th Edition). “It is time for data-driven guidelines,” she said.

Who are the high-risk patients for surgical failure in mesothelioma?

Dr Harvey Pass (NYU Langone Medical Center, USA) referred to research on the identification of high-risk patients. He noted the value of validated preoperative models, such as EORTC, and novel variables applied to larger databases of patients assessed for radical surgery. Recent research has added many more variables to prognostic models. An analysis of the IASLC MPM database found that clinical (cTNM) staging was minimally stratified by survival and was discrepant with pathologic (pTNM) staging [5].

Kodata et al. found that a nuclear grading system is a strong predictor of survival in patients with epithelioid MPM [6]. A recent study validated that system and identified additional prognostic factors [7]. From 1998 to 2014, Rosen et al. [7] analysed cases of epithelioid MPM from 17 institutions across the globe. They used the published system to compute nuclear grade. They also evaluated mitotic count, presence or absence of necrosis, and predominant growth pattern. 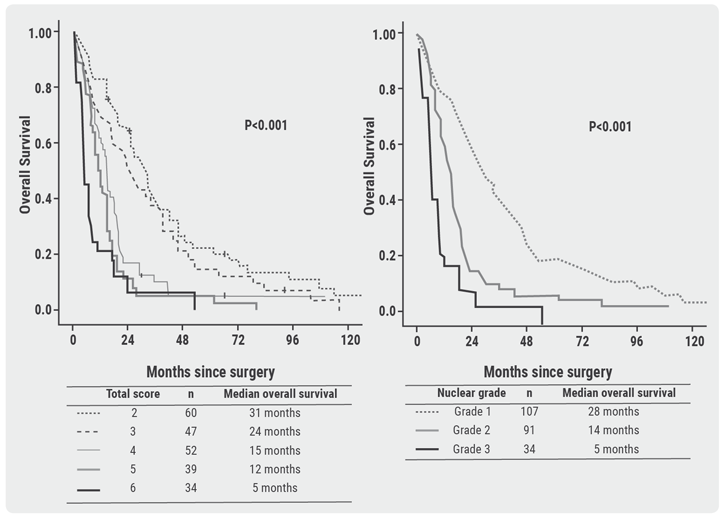 Other recent studies have confirmed that nuclear grading in epithelioid MPM is a strong and independent prognostic factor [8].They’ve also identified epithelioid BAP1-negative and p16-positive phenotypes as predictors of prolonged survival in pleural mesothelioma [9].