For nearly 4 decades, there has been little change in median OS in extensive-stage small-cell lung cancer (ES-SCLC) with 1L carboplatin and etoposide. Until now. The global, randomised, controlled phase 1/3 IMpower133 trial demonstrated that adding atezolizumab to carboplatin/etoposide resulted in significantly longer OS and PFS than treatment with chemotherapy alone. Dr Stephen Liu (Georgetown University Hospital, USA) presented results at WCLC 2018, which were simultaneously published in the New England Journal of Medicine [10].

IMpower133 evaluated atezolizumab plus 1L carboplatin and etoposide in treatment-naïve patients with ES-SCLC and ECOG performance status of 0 to 1. Atezolizumab is a humanised, monoclonal, anti-PD-L1 antibody that inhibits PD-1 and B7 signalling and restores tumour-specific T-cell immunity [11]. Patients were randomised 1:1 to receive four 21-day cycles of carboplatin and etoposide with either atezolizumab (n=201) or placebo (n=202). Treatment was followed by maintenance checkpoint inhibitor therapy or placebo until intolerable toxicity, disease progression (per RECIST v1.1), or no additional clinical benefit.

The two primary endpoints were investigator-assessed PFS and OS in the intention-to-treat population. At a median follow-up of 13.9 months, the median OS was 12.3 months in the atezolizumab group and 10.3 months in the placebo arm (HR for death, 0.70; P=0.007) (Figure 3). The respective median PFS was 5.2 months and 4.3 months (HR for disease progression or death, 0.77; P=0.02). The safety profile of atezolizumab plus carboplatin and etoposide was consistent with the previously reported safety profiles of the individual agents [12]. 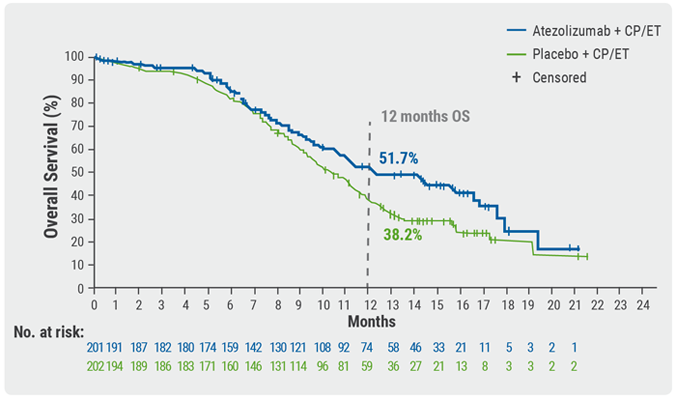 The addition of atezolizumab to carboplatin and etoposide significantly improved OS and PFS in 1L ES-SCLC in an all-comer patient population. “A reduction in the risk of death by 30% meets our bar for significant improvement,” said Dr Liu [12].