ALTA-1L was an open-label, phase 3 trial that compared the safety and efficacy of brigatinib vs crizotinib in patients with ALK inhibitor-naïve ALK+ advanced NSCLC. The initial interim analysis showed the trial met the primary endpoint: PFS was significantly longer in patients who received brigatinib vs crizotinib, marking the former as a promising first-line agent for ALK-positive NSCLC. Dr Ross Camidge (University of Colorado Cancer Center, USA) presented early results [6] and the study was simultaneously published in the New England Journal of Medicine [7].

Exclusion criteria included prior treatment with an ALK inhibitor, or radiation therapy within 14 days of the first dose of brigatinib. Patients were stratified according to baseline brain metastases and completion of at least one full cycle of prior chemotherapy and were randomly assigned to receive either brigatinib (n=137) or crizotinib (n=138). Brigatinib was initiated at a lead-in dose 90 mg for 1 week, followed by 180 mg once daily (QD). Crizotinib was given at a standard dose 250 mg twice a day. The primary endpoint was PFS determined by a blinded independent review committee. Overall, 27% of the cohort had received prior chemotherapy and 29% had baseline brain metastases. At the time of the interim analysis, median follow-up was 11.0 months among patients who received brigatinib and 9.3 months in the crizotinib-treated patients. Estimated 12-month PFS rates were higher in the former than in the latter—67% vs 43% (HR 0.49; P<0.001; Figure 1) [7]. 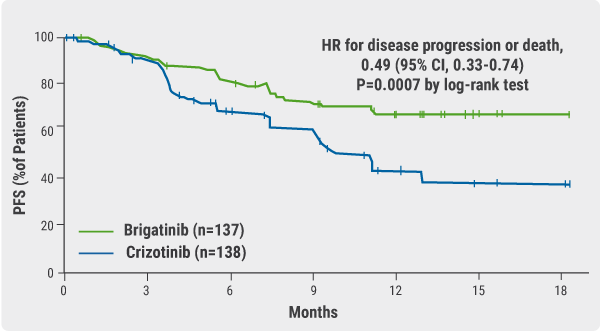