Although therapeutic care of psoriasis has improved tremendously in the past decade, unequal access to medicine and specialist care still persists. Despite pharmaceutical progress, lifestyle management is also still of crucial importance because patient characteristics influence response to treatment.

Biologics have revolutionised psoriasis care and made total skin clearance an achievable goal [1]. A retrospective cohort study has shown a significant reduction for all hospital resources in the year following initiation of biologic therapy in 76 patients with severe psoriasis; and inpatient admissions was lowered by more than 80% [2]. Thus, at least some of the higher drug costs are offset by substantial reductions in the number and length of hospital admissions. “However, significant unmet needs remain with the use of biologics,” said Prof. Jonathan Barker (King´s College London, United Kingdom). They are expensive, most patients have localised disease, and they are not 100% effective in all patients. In addition, the effect diminishes with time, and there are concerns of adverse events.

A huge step forward to a more cost-effective therapy is the introduction of biosimilars. They have the potential to improve access to treatment by reducing the financial burden on healthcare systems. In addition, the branded products have reduced their prices by about 20% in the United Kingdom in response to the availability of less expensive biosimilars and competition between the biosimilars themselves [3]. As Prof. Barker pointed out, a biosimilar is the same as the reference medicine with respect to the amino acid sequence and dose and route of administration. It is also highly similar to the reference with respect to structure, biological activity, efficacy, safety, and immunogenicity profile. Previous comparisons have shown no clinically meaningful differences to the reference medicine.

Access to psoriasis care is still unequal and shows a close relationship to the socioeconomic status of a country. According to the World Bank nomenclature, psoriasis is not on a list of diseases requiring public health programmes in low to middle income countries. In these countries, resource allocation for dermatology is very low, and they deal with a shortage of dermatologists. “Access to specialist care and therapy will probably remain a privilege. However, if therapy was less costly, it would be easier to fight for funding,” said Prof. Barker.

Psoriasis is associated with obesity, but the direction of this causal relationship remained unclear. A recently published study investigated this relationship using genetic variants as instrumental variables for Body Mass Index (BMI) and provides evidence that a higher BMI leads to a higher risk of psoriasis [4]. Another reason for improving patient’s lifestyle is that response to biologic treatment is influenced by certain clinical factors (see Figure) [5]. Factors that do not influence treatment include alcohol consumption, CRP levels at baseline, gender, ethnicity, and geographic region. Other factors gave conflicting evidence, e.g. age and psoriasis severity. The one factor that consistently adversely affected response was an increased BMI. In contrast, there was no evidence of a causal effect of psoriasis on BMI. This highlights the importance of weight management for improvement of therapeutic outcome but also for prevention of psoriasis.

Figure: Potential factors associated with response to biologic agents in patients with psoriasis [4] 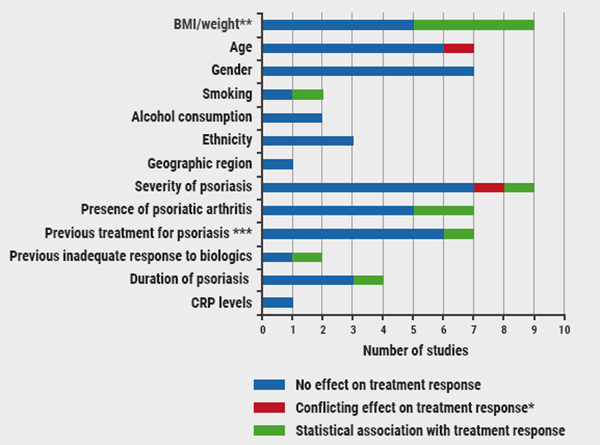 Choosing the right biologic in psoriasis

Combinations are hot in AD treatment

Various guidelines with much overlap

What the future of keloid treatment could hold

Statin use elevates risk of eczema and atopic dermatitis