Indeterminate biliary strictures remain a challenge to accurately diagnose, because they cannot be distinguished as malignant or benign despite initial ERCP and standard sampling methods. Biopsy under direct cholangioscopic vision might be superior to standard ERCP techniques such as brushing or biopsy. The aim of this study was to investigate whether DSOC improves the diagnostic yield in patients with indeterminate biliary strictures, compared with standard ERCP work-up. The primary endpoint was diagnostic accuracy of cholangioscopy or cholangiography at 6 months after the initial ERCP procedure. A total of 61 patients were determined to have an indeterminate biliary stricture based on magnetic resonance cholangiopancreaticography (MRCP) in 3 tertiary referral centres. They were randomised to standard ERCP visualisation with tissue brushing (Control arm) or DSOC visualisation and DSOC-guided biopsy (Study arm). The pathologist was procedure-blinded. Patients in the Control arm underwent an ERCP with cholangiography. A cholangiography-based impression of malignancy (yes/no/indeterminate) was recorded. ERCP-guided brushing was performed with a minimum of 9 passes. Malignancy was determined by cytology or histology on tissue sampling during the index or subsequent ERCP procedure, or surgical specimen histopathology up to 6 months after the index procedure. The assessed stricture was considered benign if malignancy was not confirmed by 6 months after the index procedure. Diagnostic accuracy of only the first procedure was compared between the groups.

The first sample sensitivity of DSOC-guided biopsies was significantly higher than ERCP-guided brushing (68.2% vs 21.4%; P<0.01; see Table). The sensitivity of visualisation (Study arm, 95.5% vs Control arm, 66.7%; P=0.02) and overall accuracy (Study arm, 87.1% vs Control arm, 65.5%; P=0.05) were significantly higher in the Study arm compared with the Control arm, whereas no significant differences were found in specificity, positive predictive value, or negative predictive value. Adverse events were equally low in both arms. 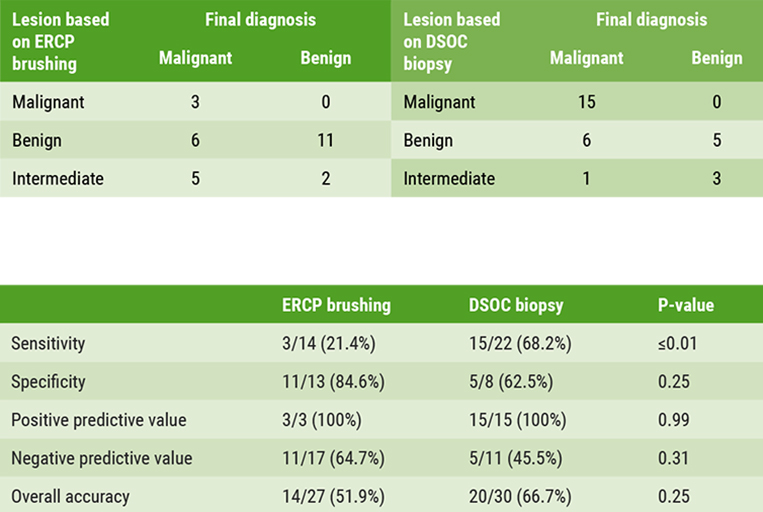 Ustekinumab is safe and effective in ulcerative colitis: 2-year data

First evidence of long-term efficacy of ABX464 in ulcerative colitis

IBD prevalence 3 times higher than estimated and expected to rise

Half of common medications wreak havoc on gut microbiome

Antibiotic resistance in H. pylori has doubled over last 20 years

Restrictive strategy for cholecystectomy selection does not reduce pain, but does reduce surgery

Metal stents are better than plastic for endoscopic biliary drainage