Prof. Ulrich Mrowietz (University Medical Center Schleswig-Holstein, Germany) presented compelling data showing that addressing the risk (obesity and smoking) and trigger factors (infections like tonsillitis and periodontitis, stress) of psoriasis will be effective in disease modification and will reduce the number of psoriasis patients in the future [1].

In the concept of holistic management, there is one sphere of interlinked comorbidities interacting with the disease manifestation/phenotype (e.g. psoriasis and psoriatic arthritis). The care team must apply management procedures taking everything into account in order to decide the level of intervention and the sequence of this management. The most important first-level intervention is to pay attention to the risk and trigger factors. The second level of intervention would include the management of comorbidity. We need to be able to not only help the patient in weight-loss and smoking cessation, but also assist the patient with all aspects of their therapy. The third level of care in holistic management is to include everything to come up with a treatment plan that is most beneficial for that individual patient.

Evidence suggests that managing risk factors such as obesity can be effective. Obesity is an independent risk factor for psoriasis, and a BMI>30 has shown to double the risk of psoriasis [2]. Furthermore, Prof. Elke de Jong (Radboud University Medical Center, the Netherlands) stated that obesity reduces treatment responses in psoriasis, as seen from real-world evidence from large registries [3]. The consequence of not paying attention to obesity and helping your patient to lose weight is that these patients will then be switched from one drug to another due to incomplete responses, entering a costly cycle that is ultimately detrimental to the patient as well. Obesity management is helpful in the treatment of psoriasis, as demonstrated by a 15-year-long Danish cohort study of obese people (BMI>30) who underwent gastric bypass surgery (1997-2012, n=12,364) compared with a similar number of Danish obese people who did not undergo surgery. The researchers looked at the risk of developing psoriasis in this cohort and showed that the risk of developing psoriasis was halved (HR 0.52) in patients who underwent gastric bypass surgery with the subsequent significant weight loss [4]. This data suggest that we could prevent half of all psoriasis cases if we are able to manage obesity in our populations; an impressive concept. A similar study in a Swedish population with a BMI>40, who were followed for 25 years, showed the same reduced risk if they underwent gastric bypass surgery [5]. For psoriasis, however, there is remarkably little data at this scale on the benefit of smoking cessation, and additional data on this topic is essential.

Managing trigger factors offers another layer of care for psoriasis patients. Tonsils/tonsillitis is an important trigger factor, particularly in children [6], and the mechanism of action of why tonsillitis triggers psoriasis is very well known. The T cells from the tonsils employ a cutaneous-associated lymphocyte antigen as a homing factor, and their mistargeting of the skin can cause localised inflammation. Even years after tonsillitis, we can find the original tonsil-derived T cell clones back in the psoriatic plaques. The first data published on the beneficial effect of tonsillectomy in resolving psoriasis was a small Icelandic randomised controlled trial of 29 patients, in which patients were randomised to tonsillectomy or an observational arm without tonsillectomy [7]. The researchers reported that the treatment arm had immediate and sustained (>2 years) improvement of their psoriasis. Prof. Mrowietz is part of a team that reproduced and expanded this study and reported at this congress for the first time. Their aim was to identify which patient would derive the most benefit from prophylactic tonsillectomy. The Keil Tonsil Study prospectively tonsillectomised psoriasis patients (n=63) and monitored the change in their psoriasis severity scores following tonsillectomy. The data indicate that patients with <1 year since diagnosis of psoriasis have the greatest benefit over time. Patients who had had psoriasis for more than 1 year did not benefit very much from the surgery. Therefore, Prof. Mrowietz concludes that the earlier the patients are subjected to tonsillectomy, the better is the long-term outcome of the disease modification. In a subgroup analysis, comparing patient outcomes based on age, it was evident that the change in PASI scores was much larger in the younger, <18 years old, patients than in >18 adults. Thus, the recommendation of this study is to select patients for tonsillectomy early after onset of disease and as young as possible. The current paradigm is that only patients with tonsillitis will have their tonsils removed, but in this Keil cohort only a very few patients reported tonsillitis. In support, a subgroup analysis of a small, Swedish, retrospective study in patients with plaque psoriasis without a history of tonsillitis showed that 5 of the 8 patients who received a tonsillectomy experienced significant clinical improvement of their psoriasis, 3 remained unchanged, and none worsened [9]. In conclusion, apart from performing tonsillectomies in patients with tonsillitis, implementing tonsillectomy in the treatment of psoriasis in selected patients seems to be gathering evidence as a management option.

Most dermatologists treating psoriasis patients will not typically look into the mouths of their patients, but the dental hygiene of psoriasis patients is critical and has tremendous implications. Most patients suffer from periodontitis, which is a disease that starts in the gingival crevice. It starts by changing the symbiont flora to a dysbiotic microbial community; thereby, stimulating an innate driven inflammatory response that also leads to bone resorption. One Danish study looked at 5.5 million Danes with mild/severe psoriasis or psoriatic arthritis and assessed their risk of periodontitis. This study convincingly demonstrated that with an increasing severity status of psoriasis, there is an increased risk of periodontitis (see Table). The risk is highest in patients with psoriatic arthritis. The underlying pathophysiology of periodontitis is highly analogous to psoriasis, as an IL-17-driven disease (see Figure). Levels of IL-17 in gingival crevice fluid is 5-10-fold higher in patients with periodontitis (n=49), compared to healthy controls (n=50) [12]. What is important to note here is that smoking is the most important risk factor for periodontitis, as well as being a risk factor for psoriasis. So, smoking cessation programmes are essential to support these patients to achieve disease modification. 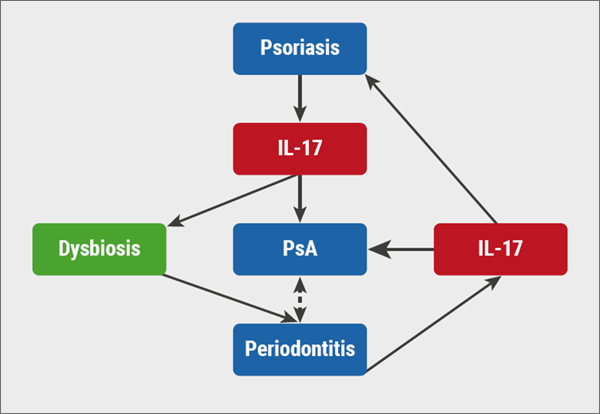 An interesting investigation regarding stress compared newly recruited undeployed American soldiers (n=6,277) with those with post-traumatic stress disorder (PTSD) after deployment in Afghanistan (n=5,583). The study then screened for risk-genes and associated diseases that are triggered by stress [13]. Surprisingly, only two diseases were more frequently found in the PTSD cohort: psoriasis (P=0.002) and rheumatoid arthritis (P<0.001). This data strongly suggests that there may be an underlying pleiotropy between PTSD and immunological disease, and that there might be a sub-cohort of psoriasis patients who are prone to stress disorders that later leads to disease aggravation. Much more data needs to be collected to understand the role stress plays as a trigger factor in psoriasis.

Addressing the risk factors (obesity and smoking), and the trigger factors (infections like tonsillitis and periodontitis in addition to stress) will be effective in disease modification where possible and will reduce the number of psoriasis patients. Researchers need to gather more data about the impact of smoking cessation, stress prevention, and dental health on plaque psoriasis.

Favourable safety profile of long-term use of ixekizumab

Brodalumab onset of action is significantly faster than ustekinumab: Results from the phase 3 AMAGINE-2 and -3 studies

Results from the ECLIPSE trial: does blocking IL-23 have better long-term outcomes in psoriasis?

ABP501 biosimilar for adalimumab: What you need to know