__Prof. Emma Guttman-Yassky (Mount Sinai Medical School, USA) shakes down the similarities and differences between psoriasis vulgaris and chronic atopic dermatitis (AD) and concludes that they fall under the same pathomechanistic umbrella but with very distinct features [1]. __

For example, both psoriasis vulgaris and chronic AD are generally characterised by nearly indistinguishable histological psoriasiform dermatitis. At a mechanistic level we can classify both diseases as epidermal hyperplasia responses to certain cytokines produced by activated T cells in skin lesions, though the cytokines differ per disease [2]. About 12 years ago, a study comparing the expression of the proliferation marker Ki-67 by immunohistochemical staining of frozen sections of psoriasis and AD demonstrated that epidermal hyperplasia was equally evident in both psoriasis and AD [3]. This same study also found a similar extent of T cell infiltration in both the dermis and the epidermis in both diseases. However, the diseases exhibited very “polar” immune responses when the cytokine profile was further defined; in psoriasis, IL-17, together with several Th17-associated products, was secreted by the activated T cells, whereas AD samples were characterised by Th2 cell responses like IL-13 production and other products of the Th2 pathway. The researchers of this study also detected an additional pathway being introduced by the Th22 cell, which they determined was important to the pathogenesis of AD but to a far lesser extent in psoriasis. In conclusion, it is generally believed that AD is Th2- and Th22-polarised while psoriasis is primarily Th17-driven, although there is some input from the Th22 pathway as well. Both diseases have characteristic contribution from the Th1 cell pathways, primarily in their chronic stage, but it is not known whether Th1 cells in this context are acting as bystanders or as a potential negative regulator of immune activation.

Some known differences and similarities between these diseases have been identified. In psoriasis, TNF- and iNOS‐producing dendritic cells (Tip-DCs) produce cytokines stimulating the 3 major players in psoriasis: Th17, Th22, and Th1 cells. IL-17 ligands activate IL-17 receptors on keratinocytes and immune cells and work in synergy with Th1 and Th22 cytokines to induce the clinical features of psoriasis. Cooperative actions of IL-17 and IL-22 lead to increased expression of the proinflammatory S100 proteins. IL-17 also directly or indirectly stimulates two cutaneous autoantigens (i.e. LL-37/cathelicidin and ADAMTSL5) that trigger a positive feedback loop driving further activation of Th17 cells. In AD, although the overall signalling and feed-forward loop is comparable, a different (inflammatory) dendritic cell initiates AD. Inflammatory dendritic cells are characterised by presence of the thymic stromal lymphopoietin (TSLP) receptor and OX40L ligand, and they in turn stimulate the three major types of T-cells mediating AD: the Th2-, Th22-, and Th1-cells. AD begins with an acute phase that is signified by excessive Th2-, Th22-, and Th17-cell activation. Transition to the chronic phase is marked by the onset of Th1-cell activation alongside the continued activation of Th2 and Th22 cells. TSLP, IL-4, and IL-13 may form a positive feedback loop whereby TSLP, produced by keratinocytes, drives Th2 polarisation. In part, this occurs through activation of dendritic cells, while IL-4 and IL-13 act on keratinocytes to further increase TSLP levels. Activation of Th2 cells leads to two AD hallmarks, including inhibition of barrier integrity proteins such as loricrin, filaggrin, and others, and reduction in lipids (i.e. free fatty acids and ceramides). IL-22 promotes hyperplasia, downregulates terminal differentiation, and synergises with IL-17 to induce the S100 genes, like in psoriasis. Prof. Guttman-Yassky pointed out that, recently, a molecular classifier has also added to the distinction between these diseases, with levels of CCL27 and iNOS being inversely associated in each disease (see Table) [4]. 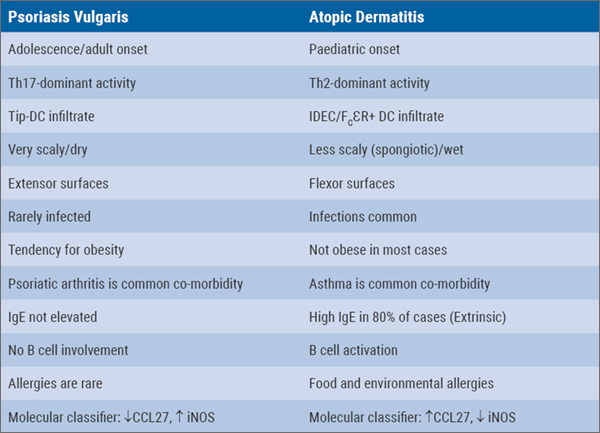 Favourable safety profile of long-term use of ixekizumab

Brodalumab onset of action is significantly faster than ustekinumab: Results from the phase 3 AMAGINE-2 and -3 studies

Results from the ECLIPSE trial: does blocking IL-23 have better long-term outcomes in psoriasis?

ABP501 biosimilar for adalimumab: What you need to know