A cohort study of nearly 3,000 COVID-19 patients in intensive care did not reveal any advantages in preventing death by medicating with anticoagulation at therapeutic dosage. Obesity and high D-dimer levels were among the recognised independent factors associated with VTE.

A strong association has been found between coagulation-related complications like venous thromboembolism (VTE) and COVID-19 [1-4]. "As a result, it has been hypothesised that the hypercoagulability in patients with COVID-19 may be a key mechanistic pathway leading to multiple organ failure and death and it has gained considerable attention as a potential therapeutic target," said Dr Hanny Al-Samkari (Massachusetts General Hospital, USA) [5]. Up to now, no randomised controlled trial data is available to give guidance on the optimal prophylactic dose of anticoagulation for critical patients in ICU. Dr Al-Samkari and his team set up a large 67-centre cohort study conducted in US centres to provide robust estimates on the effect of therapeutic anticoagulation.

The analysis included data on patients' first 14 days of ICU, which was collected by manually reviewing charts at the different sites (n=3,239). After the database was locked on 8 May 2020, all enrolled patients had a follow-up of ≥28 days. Coagulation complications were defined as X-ray confirmed VTE, ischaemic stroke, major bleeding, severe coagulopathy, heparin-induced thrombocytopenia, and disseminated intravascular coagulation. To identify predictors of VTE, a multivariable logistic regression was fitted. To evaluate the effect of anticoagulation on survival, a target trial emulation distinguished between receivers and non-receivers of therapeutic anticoagulation in the 2 days following ICU admission, using a Cox model that adjusted for confounders with inverse probability weighting. In addition, subgroups were pre-specified for analysis: age, sex, BMI, mechanical ventilation on ICU day 1, and D-dimer levels on ICU days 1 or 2. The included patients from all over the USA had a median age of 61 years, 64% were males, 66% were intubated, and 42% had vasopressor treatment on ICU day 1.

The results showed that 39.3% of participants died, 43.4% discharged alive within 4 weeks, and 17.4% were still hospitalised at 28 days. VTE was sustained by 6.3% (n=204), while 2.8% (n=90) suffered from major bleeding during their first 14 days in ICU. Of note, 60 of the 90 major bleedings occurred under therapeutic anticoagulation. “Patients with a confirmed VTE had a mortality rate similar to the cohort as a whole; however, patients with major bleeding had a much higher mortality rate, exceeding 60%,” reported Dr Al-Samkari. The target trial emulation identified several variables that were independently associated with VTE: male sex (OR 1.7), BMI≥40 (OR 2.08), and high D-dimers (OR 2.5 for levels between 2,501-10,000 ng/mL and OR 4.2 for levels >10,000 ng/mL). Of the 2,809 patients included in the target trial emulation, 384 received therapeutic anticoagulation and 2,425 did not. The overall characteristics of these 2 groups were comparable, and the risk of death within the first 28 days after ICU admission was similar with a hazard ratio of 1.12. Hazard ratios of the subgroup analysis were not significant (see Figure). “Our findings do not support empiric use of therapeutic anticoagulation in critically ill patients with COVID-19,” Dr Al-Samkari concluded. 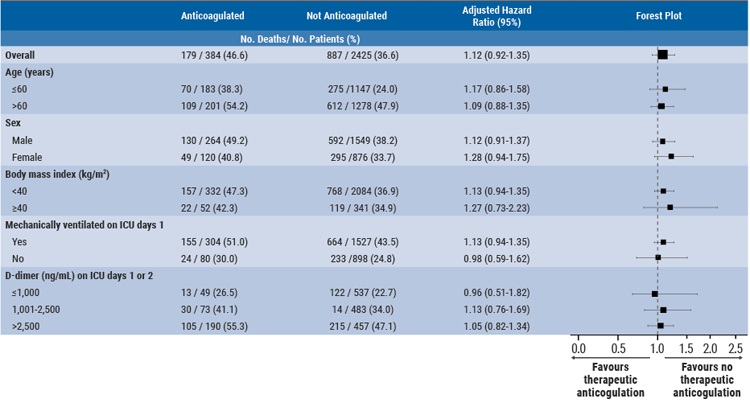