The diagnostic delay of CTEPH after acute PE is over 1 year and associated with increased mortality. Dr Gudula Boon (Leiden University Medical Center, the Netherlands) and her colleagues developed a non-invasive screening strategy comprising a 'CTEPH prediction score' and 'CTEPH rule-out criteria' aimed at diagnosing CTEPH earlier and limiting the number of required echocardiograms. "Six predictors [e.g. unprovoked PE, hypothyroidism, and diagnostic delay >2 weeks] have been identified that are highly probable for CTEPH and we included them in our score," Dr Boon explained. The CTEPH rule-out criteria were only applied on low-risk patients with a presence of CTEPH-specific symptoms. According to these criteria, patients with at least 1 ECG criteria and/or abnormal NT-proBNP values were referred to echocardiography. Included were 424 patients from 6 hospitals in the Netherlands, Poland, and Belgium. Of these participants, 69% were judged low-risk and 31% high-risk. Of all participants, 48% were low-risk patients without CTEPH-specific symptoms, and 21% were low-risk patients with symptoms.

Successful identification of almost all CTEPH patients The algorithm successfully ruled out 342 of 343 patients (see Figure). One missed case by the algorithm translates into a failure rate of 0.29%. "There was only 1 missed case who had persistent symptoms. However, this patient would also have been missed if echocardiography had been performed initially," Dr Boon explained. With the algorithm, CTEPH was diagnosed within 4 months after the index PE diagnosis, which is less diagnostic delay than the average. In addition, echocardiography was avoided in 81% of patients. 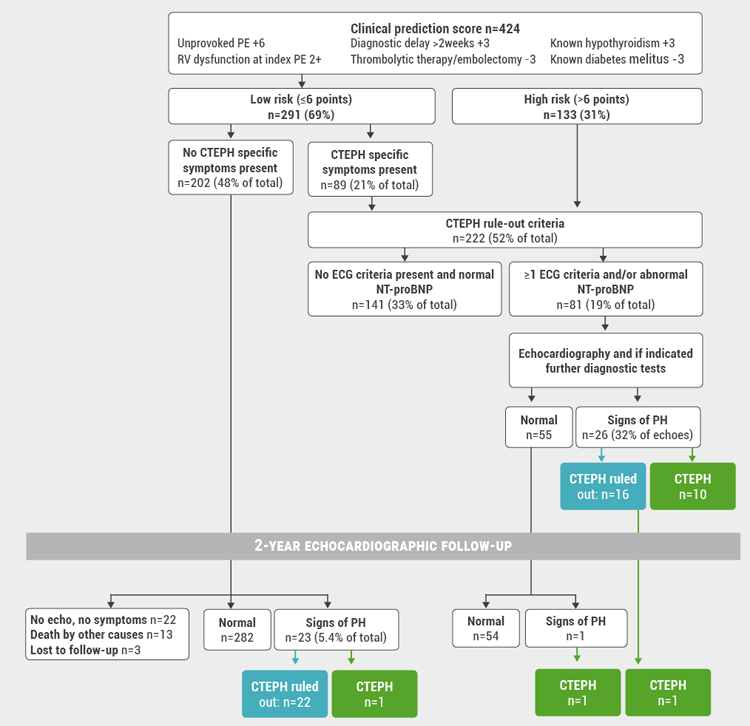