An observational investigation of Danish registry data showed an increased risk of arterial thromboembolism (ATE) for cancer patients when compared with the general population, especially for older cancer patients.

Although the association of cancer and venous thromboembolism is well known, little data is available on the occurrence of ATE in patients with malignant tumours [1]. Thus, Dr Frits Mulder (Amsterdam UMC, University of Amsterdam, the Netherlands) and colleagues set out to evaluate the risk of ATE in cancer patients versus the general population.

The analysis included registry data from a cohort of 458,462 adult patients with a first-time cancer diagnosis between 1997 and 2017 and 1,375,386 participants from the general population matched by sex and age Median age was 69 years for both groups. Primary outcome was the assessment of ATE consisting of a composite of myocardial infarction, stroke (i.e. ischaemic or unspecified), and peripheral artery occlusion. At 6 and 12 months of the study, cumulative incidences were calculated per 1,000 person-years and cause-specific hazard ratios for ATE were assessed between groups by using a Cox regression model.

At 6 and 12 months, the cumulative incidences of ATE were 1.50% and 2.11% in the cancer patient group, while ATE was found in 0.76% and 1.48% of the general population cohort, respectively. Hazard ratios were 2.36 (6 months) and 1.87 (12 months). There were substantial risk differences depending on age and type of cancer, with higher incidences of ATE in patients over 75 years with e.g. brain, pancreas, stomach, lung, and bladder cancers and lower incidences in patients under 65 with breast, prostate, and gynaecological cancers (see Figure).

Figure: ATE incidence rate for each cancer type during the first 6 months after cancer diagnosis [1] 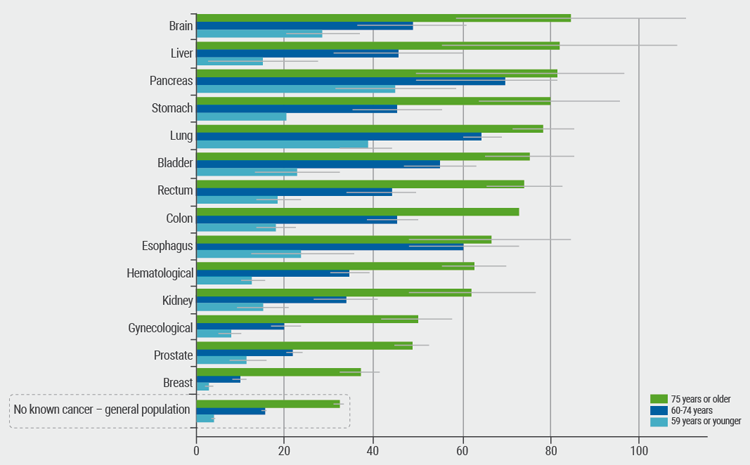