Rheumatoid arthritis (RA) patients with an initial, inadequate response to either the Janus kinase (JAK) inhibitor upadacitinib or the TNF inhibitor (TNFi) adalimumab can benefit from switching to the alternative therapy. The first results showing the effectiveness of a TNFi following failure of a JAK inhibitor were presented [1].

Currently, conventional synthetic disease-modifying antirheumatic drugs (csDMARDs) are well established as first-line treatments for RA-patients; however, not all patients benefit. If remission or low disease activity with csDMARDs is not achieved, therapy with a biological DMARD, TNFi, or JAK inhibitor is recommended [2,3]. While data shows that patients regularly switch from bDMARD to JAK treatments, there is a lack of evidence for patients with inadequate response to a JAK inhibitor switching to a bDMARD. Recently, the JAK1-selective inhibitor upadacitinib demonstrated superior efficacy through 26 weeks compared with the standard use of adalimumab plus continued low-dose methotrexate (MTX) [4]. Genovese et al. aimed to describe outcomes linked to treatment shift from upadacitinib to adalimumab and vice versa, in RA-patients who did not achieve remission or low disease activity [1].

The phase 3 SELECT-COMPARE trial was set up as a double-blind, placebo-controlled head-to-head study. A total of 1,629 patients ≥18 years old with moderate-to-severe RA and an inadequate response to methotrexate (MTX-IR) were randomly assigned to receive 15 mg/day oral upadacitinib (n=651), 40 mg adalimumab injections every other week (n=327), or placebo (n=651) in addition to background MTX.

Primary results showed that 126 (19%) patients receiving upadacitinib and 77 (24%) receiving adalimumab failed to achieve ≥20% improvement in either tender or swollen joint count by weeks 14, 18, or 22 and were switched without a wash-out period to receive the alternative drug treatment. The post-hoc analysis showed a potential benefit for switching between upadacitinib and adalimumab (see Table). Overall, data obtained after the switch to upadacitinib are consistent with data observed in a phase 3 study of upadacitinib in RA patients with inadequate response to bDMARDs [5]. 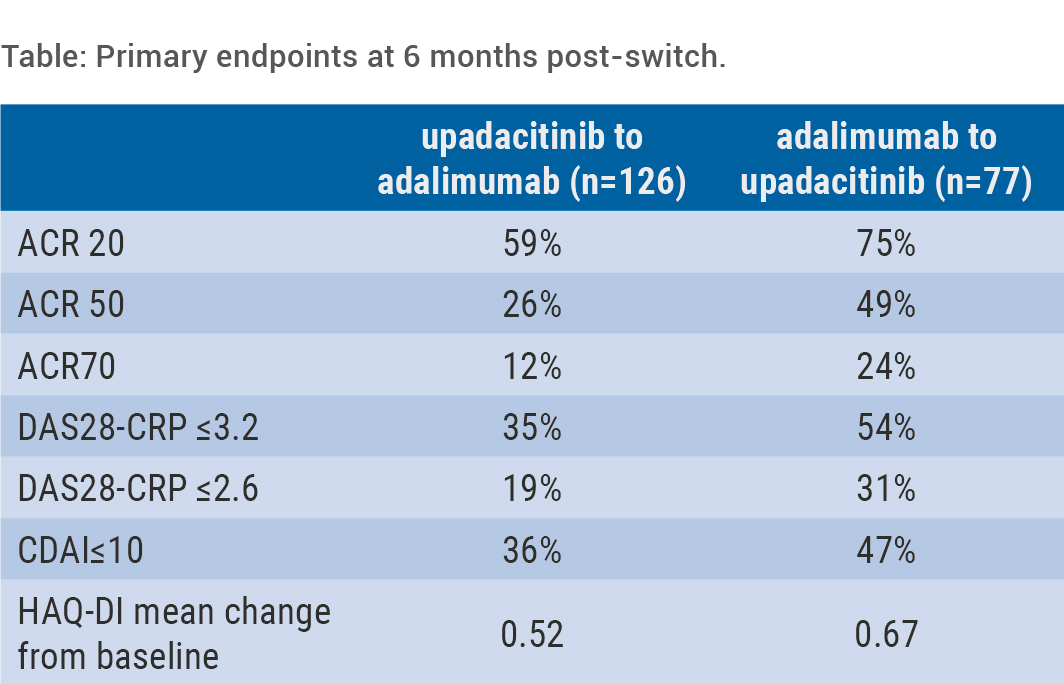 Patient proportion with infection and serious infection through 6 months after switching appeared consistent with those observed for adalimumab and upadacitinib during comparable months. No additional or unusual safety concerns were observed in either treatment group.