In a head-to-head comparison of the 2 drugs, it was concluded that ixekizumab showed superior efficacy to adalimumab, based on simultaneous achievement of ACR50 and PASI100 responses in week 24, in biologic-naïve patients with active psoriatic arthritis (PsA) and skin disease. Greater improvements with ixekizumab versus adalimumab were also attained in individual PsA domains and composite treat-to-target outcomes.

TNF inhibitors (TNFi) like adalimumab are frequently prescribed in patients receiving biologic treatment. However, a significant number of patients with PsA have insufficient response or become intolerant to TNFi therapy [1]. Therefore, therapies with an alternative mechanism of action and with long-term efficacy and safety are important for patients with PsA. IL-17A is a pro-inflammatory cytokine involved in the pathophysiology of PsA [2]. Ixekizumab is a high affinity monoclonal antibody that selectively targets IL-17A [3].

Dr Philip Mease (Swedish Medical Center and University of Washington, Seattle, USA) presented results of a multicentre, randomised, open-label, assessor-blinded, parallel-group head-to-head comparison of the efficacy and safety of ixekizumab versus adalimumab in patients with PsA who had never before received treatment with a biological drug [4]. Eligible patients had active PsA (≥3 tender joint count and ≥3 swollen joint count), and plaque baseline psoriasis body surface area (BSA) ≥3%. They were biologic-naïve and revealed inadequate response to conventional synthetic disease-modifying anti-rheumatic drugs (csDMARDs). A total of 566 patients were randomised 1:1 to receive ixekizumab or adalimumab for 52 weeks. The on-label dosing was based on the severity of PsA.

The primary objective was superiority of ixekizumab versus adalimumab, measured by the proportion of patients achieving both ACR50 and PASI100 in week 24. Both non-inferiority of ixekizumab for ACR50 and superiority of ixekizumab for PASI100 were key secondary endpoints at week 24. Additionally, outcomes were assessed related to PsA, skin, a composite treat-to-target of minimal disease activity (MDA) and DAPSA, PASDAS remission, patient-reported outcomes, and safety. The mean age was 48 years, more than half were men, and disease duration was 6 years concerning PsA and 15 years in regard to psoriasis. Just over two-thirds of the patients were on concurrent treatment with a conventional synthetic drug, most often methotrexate.

The results showed that a 24-week regimen with each of these agents, both of which have regulatory approval for treating PsA, led to achievement of the primary endpoint in 36% of patients treated with ixekizumab and 28% of patients treated with adalimumab (P<0.05). Ixekizumab was superior to adalimumab in reaching the primary outcome in active PsA, as measured by achievement of combined ACR50 and PASI100 (see Table). While improvement from baseline was achieved with both treatments, significantly better results were observed with ixekizumab versus adalimumab for skin and composite treat-to-target outcomes, enthesitis resolution, and skin-related quality of life. No unexpected safety signals were observed.

The study was criticised by Dr Roy Fleischmann (University of Texas Southwestern Medical Center, Dallas, USA), because of the use of a non-traditional endpoint. In fact, the inclusion of a skin outcome which received equal weight as the joint response assessment instrument might have introduced an inherent bias in favour of ixekizumab. Dr Mease admitted that the study’s design favoured ixekizumab, but he added that this decision reflected a desire by the researchers to choose a primary endpoint that represented both of the prominent pathologies seen in patients with PsA. The equivalence of both therapies for the PsA component and superiority of ixekizumab for enthesitis in one secondary outcome measure puts IL-17A and TNF inhibition on a par with respect to PsA therapy, but more studies are needed. 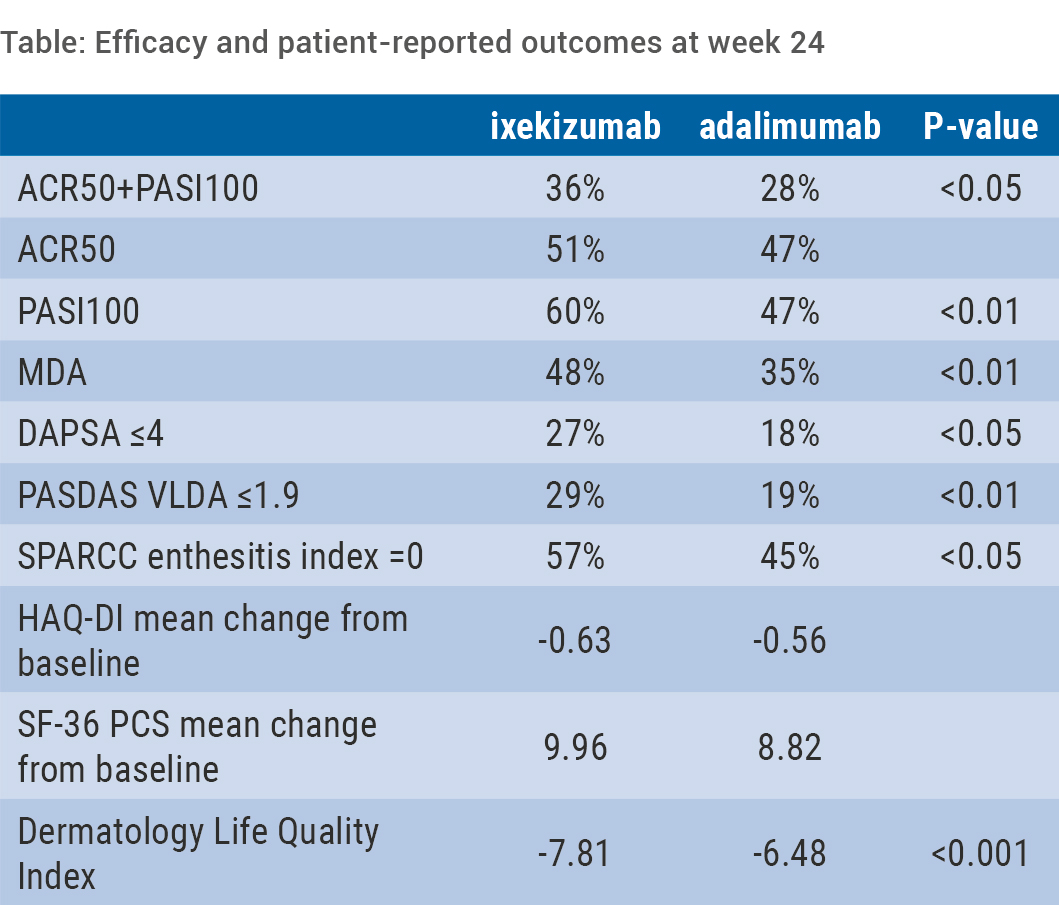