Paccou et al. evaluated baseline characteristics of CD and UC patients treated with vedolizumab, as well as assessing the effect of vedolizumab on joint manifestations in patients with inflammatory bowel disease (IBD)-associated SpA, and new onset of SpA under vedolizumab.

This study was performed as a single-centre, retrospective, and observational study, conducted between July 2014 and July 2017. It involved reviewing the charts of all patients with IBD who had undergone treatment with vedolizumab for more than 3 months. A total of 171 patients diagnosed with IBD were treated with vedolizumab. It needs to be noted that 97.1% of patients had been previously treated with at least one TNFi.

Table 2: Characteristics of patients and the main results [1] 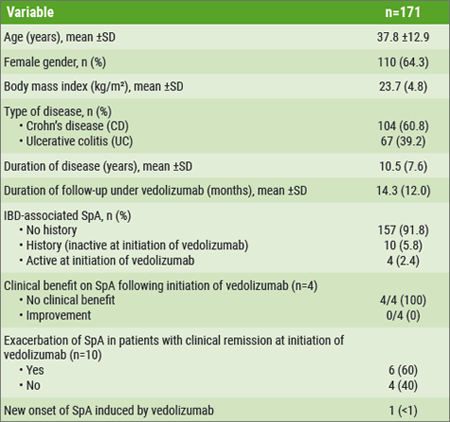 Dr. Paccou (Amiens University Medical Center, France) concluded that this study of vedolizumab does not support its efficacy in patients with IBD-associated SpA. It might even induce exacerbation or new onset of SpA. However, inception cohort studies are needed to prospectively evaluate the effect of vedolizumab on joint manifestations.[1] Overall, this study provides good translational therapeutic data supporting the concept that the pathomechanisms of joint manifestations in SpA and IBD differ, at least in a proportion of subjects.