The largest study of use in routine care of rituximab in patients with SSc showed significant changes on skin fibrosis but not on lung fibrosis. The safety profile was considered good and future studies are warranted into the possible role of rituximab in this patient population.

According to Prof. Allanore, (University of Paris Descartes University, France), a few small-sized observational studies have suggested that rituximab is a promising treatment in patients suffering from SSc. The study aimed to evaluate the outcomes of SSc patients receiving in routine care rituximab.

This was done as a retrospective longitudinal multicentre observational study in which eligible SSc patients were treated with rituximab upon the decision of their physician within the framework of European Scleroderma Trials and Research group (EUSTAR). This is an international scleroderma research network that aims to foster the awareness, understanding, and research on systemic sclerosis and its management throughout Europe and the rest of the world. It has a multicentre online database that allows following prospectively more than 15,000 patients with scleroderma in more than 200 international centres.[8]

Epidemiological and clinical characteristics, the indication for initiating the treatment, as well as parameters at baseline and at the last visit under treatment were determined. These parameters included mRSS, joint, lung and gastrointestinal involvements, treatment, laboratory tests, and safety events. A total of 254 patients were included. Of these, 65% had diffuse cutaneous SSc, 54% was positive for anti-topoisomerase, and 71% had lung fibrosis. The indication for the treatment with rituximab was lung involvement in 56% of cases, followed by articular (42%) and skin involvements (30%). Mean follow-up was 2.5 years.

AEs were seen during the follow-up in 31% of patients of which 14% (n=35) had serious AEs. Of the patients experiencing serious AEs, 9/35 had infections, 9/35 patients had cardiovascular events, 6/35 died (of which 2 deaths were possibly related to rituximab), 5/35 developed cancer, 4/35 had allergic reactions, 1/35 had agranulocytosis, and 1/35 had SRC. A total of 9.4% of patients discontinued the treatment. Researchers pointed out that these results need to be confirmed by future randomised controlled studies.[9]

According to experts and physicians, the classification criteria for SLE were in need of an update and subsequent validation. The main goal was to simplify and validate the new criteria in a large international cohort. This proved to be a substantial task and was achieved by using a multinational committee which involved 23 expert centres, which added up to 100 patients each either with SLE and with non-SLE diagnoses. Three independent reviewers verified diagnosis for 1,193 SLE and 1,059 non-SLE patients. The derivation cohort contained 500 randomly selected SLE patients as well as non-SLE patients; the remaining patients then made up the validation cohort.

A new set of weighted criteria were compared to non-SLE controls and it was decided that an SLE diagnosis had to have an Anti-Nuclear Antibody titre greater >1:80 and a classification threshold of 10, derived from adding up the values given to the separate items as outlined in Table 4. The highest number of points was given to nephritis on biopsy whilst oral ulcers had the least number of points (Table 4). 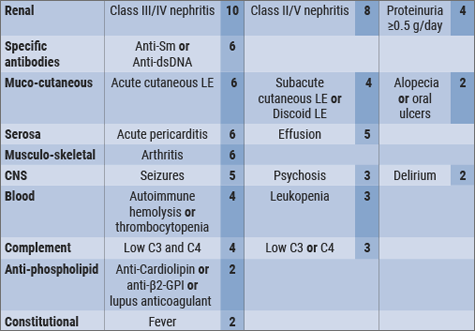 The new criteria significantly increased the sensitivity to approx. 96%-98% which is an increase of 14% over the previous ACR 1998 SLE criteria and improved the specificity (which is now 93-96%) over the 2012 SLICC criteria by 6%. It was thus concluded that the new criteria, which were developed with EULAR/ACR support, achieved sensitivity which lies very close to that of the SLICC criteria, whilst the specificity of the ACR criteria was maintained.[10]