Data from the Dutch COBRA study show that RA mortality is normalised when compared to the general population after 23 years of follow-up. These findings confirm that early, intensive treatment of rheumatoid arthritis (RA) – which may include the use of glucocorticoids – offers long-term benefits and strongly suggests these benefits include reduced mortality towards controls. Mortality in patients with RA is known to be higher than what has been observed in the general population.[1-3] The adverse effects of the disease also take some time to show; they become apparent after more than a decade. Yet, it was unknown whether early, intensive treatment improved mortality rates. Research from the COmbinatietherapie Bij Rheumatoïde Artritis (COBRA) trial, a prospective cohort study of early RA, showed that early RA treatment provides long-term effectiveness without causing undue harm.[4]

In the current analysis presented at EULAR 2018, researchers examined mortality in the COBRA trial cohort after 23 years. They compared this mortality to that of the general population in the Netherlands by using a reference sample of the general population matched for age and gender (data from Statistics Netherlands). The standardised mortality ratio (SMR) was used to compare the trial groups and the general population. Data for almost all COBRA patients (154/155) was available. The mean duration of follow-up in this cohort was 23 years (in patients alive, with a range between 22-24 years). In total, 44 (28%) of all patients had died (SMR = 0.80; 95% CI 0.59-1.06). This number consists of 20/75 of COBRA patients (27%; SMR = 0.75; 95% CI 0.47-1.14) and 24/79 of patients who used sulphasalazine (30%; SMR 0.85; 95% CI 0.56-1.25). This difference in mortality was not significant (P=0.61). Data from the reference sample of the general population (n=154) showed that 36% had died. The positive trend for combined treatment over sulphalasazine decreased over time (Figure 1).1 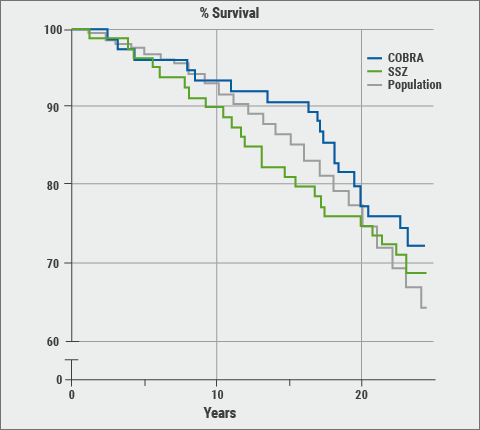 These results confirm long-term benefits of early, intensive treatment of RA that includes the use of glucocorticoids. Furthermore, this study is one of the first to show a normalisation of RA mortality compared to the general population after 23 years of follow-up.[1]