Apart from a decreased quality of life, PsA is also characterised by a substantial economic burden.[4,5] Biologic treatments for PsA are increasingly scrutinised in health technology assessments, and the most commonly used economic model framework for assessing biologics in PsA is the York Assessment Group model developed as part of a National Institute for Health and Care Excellence (NICE) appraisal (the so-called ‘York model’).[6] In this model, improvement in HAQ-DI reflects physical function, and is linked to initial treatment response measured by joint improvement assessed by PsARC.

Ruyssen-Witrand et al. assessed the effectiveness of bDMARDs on HAQ-DI among active biologic-naïve PsA patients through Bayesian network meta-analyses to understand the relationship between HAQ-DI and PsARC response. Data was identified through a systematic literature review and Bayesian network meta-analyses were conducted in line with NICE Guidelines to assess the mean HAQ-DI scores change from baseline for ixekizumab, adalimumab, ustekinumab, etanercept, golimumab, infliximab, apremilast, secukinumab, certolizumab pegol, and placebo in the biologic-naïve overall population, as well as in PsARC responders and non-responders.[7] Results were expressed as absolute mean change from baseline and associated standard deviations, and 95% CI. Treatment effects were estimated based on results at 12 weeks where available; otherwise data relating to the closest time period after 12 weeks were used (up to 16 weeks).

A total of 14 randomised clinical studies were identified for inclusion in the analyses evaluating effects on HAQ-DI scores, which included ixekizumab every 2 weeks (n=1) and every 4 weeks (n=1), etanercept (n=1), infliximab (n=2), ustekinumab (n=1), golimumab (n=1), apremilast (n=3), secukinumab (n=1), and adalimumab (n=3). For apremilast, certolizumab pegol, and secukinumab, data were not available specifically from biologic-naïve and data were used from the full study population (i.e. biologic-naïve and biologic-experienced). It was shown that in the overall population, the improvement in HAQ-DI scores from baseline was greatest for ixekizumab every 2 weeks, etanercept, infliximab, certolizumab pegol, and secukinumab (Figure 5).[8] 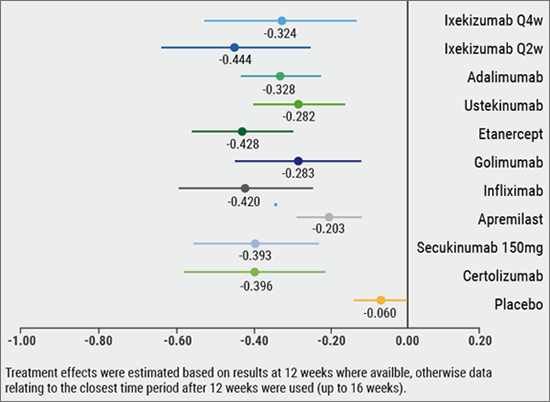 Among PsARC responders, the greatest improvement from baseline in HAQ-DI scores was observed for infliximab, etanercept, secukinumab and ixekizumab.[8]