Prof. Dion Morton (University of Birmingham, UK) presented the new results of the FOxTROT trial. The study compared outcomes with a 6-month course of postoperative oxaliplatin-based chemotherapy vs 6 weeks of neoadjuvant therapy, followed by surgery and an additional 18 weeks of adjuvant chemotherapy. Neoadjuvant chemotherapy led to a non-significant reduction in recurrence rate, but it was associated with significantly fewer surgical complications and improved surgical outcomes (R0 resections) vs adjuvant therapy.

The primary endpoint was the frequency of relapse during the first 2 years post-surgery. Investigators assumed a 2-year treatment failure rate of 25%-32% for the control arm and hypothesised that neoadjuvant therapy would reduce the rate by 25%. On that basis, they enrolled and randomised 1,052 patients 2:1 to pre- and postoperative therapy or to adjuvant therapy only (see Figure).

Patients who received chemotherapy before surgery had a 2-year recurrence rate of 13.6% vs 17.2% for patients receiving adjuvant chemotherapy. The difference met the prespecified reduction in the hazard ratio (0.75), but the confidence interval crossed 1.0 (95% CI 0.55-1.04, P=0.08) and consequently did not achieve statistical significance because of a lower-than-expected event rate in the control arm. The 5-year recurrence rates were 27% for the control arm and 21% for the neoadjuvant arm.

Attempted curative surgery was successful in 98% of patients in both treatment groups. Significantly, more patients in the control arm did not receive planned chemotherapy (27% vs 4%; P<0.0001), either because the patient was too sick or refused treatment (11%) or the tumour was considered low risk (16%).

Fewer patients receiving preoperative chemotherapy went to surgery but had no resection (0.3% vs 1.1%), leading to a higher rate of microscopically complete surgical resection (93.1% vs 88.4%). Collectively, the differences resulted in a significant advantage for the neoadjuvant group (P=0.001).

Neoadjuvant therapy led to substantial tumour downstaging, including more patients with pT0 (4.1% vs 0%) and pT1/pT2 (11.7% vs 5.8%) at surgery and fewer patients with pT4 disease (20.5% vs 29.8%). These differences were significantly in favour of neoadjuvant chemotherapy (P<0.0001). Nodal stage at surgery was also lower in the neoadjuvant chemotherapy group (P<0.0001), including half as many patients with positive apical nodes (3.8% vs 7.5%, P=0.013). Fewer patients had macroscopically incomplete surgery (0.3% vs 1.1%), or had microscopically incomplete surgery (4.2% vs 8.8%). Interestingly, there was no benefit observed in tumours deficient in DNA mismatch repair.

Patients receiving neoadjuvant treatment had lower perioperative morbidity rates: anastomotic leaks (3.6% vs 8.0% ); complications prolonging hospital stay and re-operations (4.3% vs 6.7% ). The 30-day postoperative mortality was 0.4% after neoadjuvant therapy vs 0.6% in the control arm.

While the observed differences did not translate into a significant overall or progression-free survival benefit,FOxTROT has shown the feasibility of a neoadjuvant approach, which seems non-inferior to today’s standard approach (and reminds of initial studies in breast cancer). It opens the way for future studies exploring a higher number of neoadjuvant treatment cycles or a more intensive treatment approach 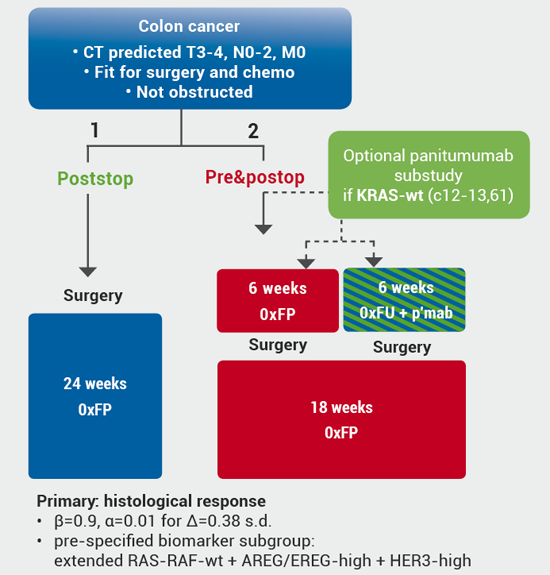