The primary endpoint of progression free survival (PFS) was previously reported [2]. Final overall survival results were presented (58% maturity): the median OS with osimertinib was 38.6 months vs 31.8 months with first generation EGFR TKIs, with a hazard ratio of 0.799 (P=0.0462; see Table). More than half (54%) of patients in the osimertinib group were alive at 3 years compared with 44% in the standard care group.

Prof. Ramalingam noted that after disease progression, 31% of patients in the control group crossed over to the osimertinib arm, representing 47% of patients in the control group that received post-study therapy. He concluded: “FLAURA met both its primary and key secondary endpoints and showed a favourable safety profile for osimertinib. The results further reinforce the clinical utility and superiority of osimertinib in the front-line setting. Based on these data, osimertinib should be the preferred front-line therapy for EGFR-mutated lung cancer patients.” 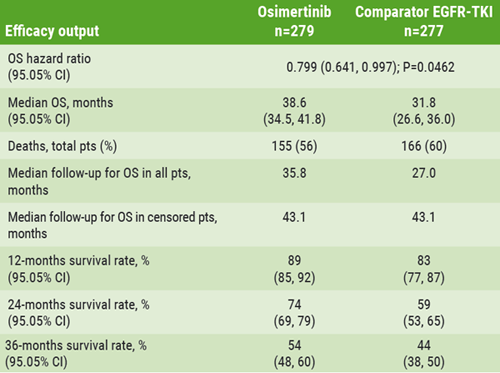