Patients with high-grade serous ovarian cancer experienced a 32% reduction in the risk of progression or death with frontline combination veliparib plus carboplatin and paclitaxel followed by veliparib maintenance, according to the phase 3 VELIA trial study, presented by Robert Coleman (University of Texas, MD Anderson Cancer Center, Houston, USA) [1].

The primary endpoint was investigator-assessed progression-free survival (PFS) in Arm 3 compared with Arm 1 using stratification by the presence germline BRCA mutations, and homologous recombination deficiency (HRD; see Figure). Secondary outcomes of overall survival and disease-related symptom scores have yet to be reported.

The investigators concluded that the addition of veliparib to front-line carboplatin and paclitaxel with continued veliparib monotherapy maintenance significantly improved PFS in all cohorts of women with newly diagnosed high-grade serous carcinoma, including the overall population without selection for biomarkers, nor timing or outcome of cytoreductive surgery and in cohorts of patients with BRCA mutation or HRD. The study findings were simultaneously published in the NEJM [2].

Invited discussant Mansoor Raza Mirza (Copenhagen University Hospital, Denmark) said that VELIA demonstrated clinically significant benefit of the experimental arm combining chemotherapy plus veliparib followed by veliparib in maintenance in the population with BRCA mutation or HRD. VELIA is the first phase 3 study to assess impact of combination chemotherapy plus PARPi followed by PARPi. Addition to chemotherapy caused increased toxicity, reduced use of potentially curative chemotherapy, and did not provide a benefit over what is observed in other PARPi first-line trials (in which the PARPi was added as maintenance only). Absence of comparator arm with veliparib in maintenance phase only makes it unclear if addition of veliparib to chemotherapy is necessary to provide observed benefit.

Figure. Kaplan Meier curves of patients free from disease progression or death, stratified by the presence of BRCA mutations, or HRD mutation, or all data combined. 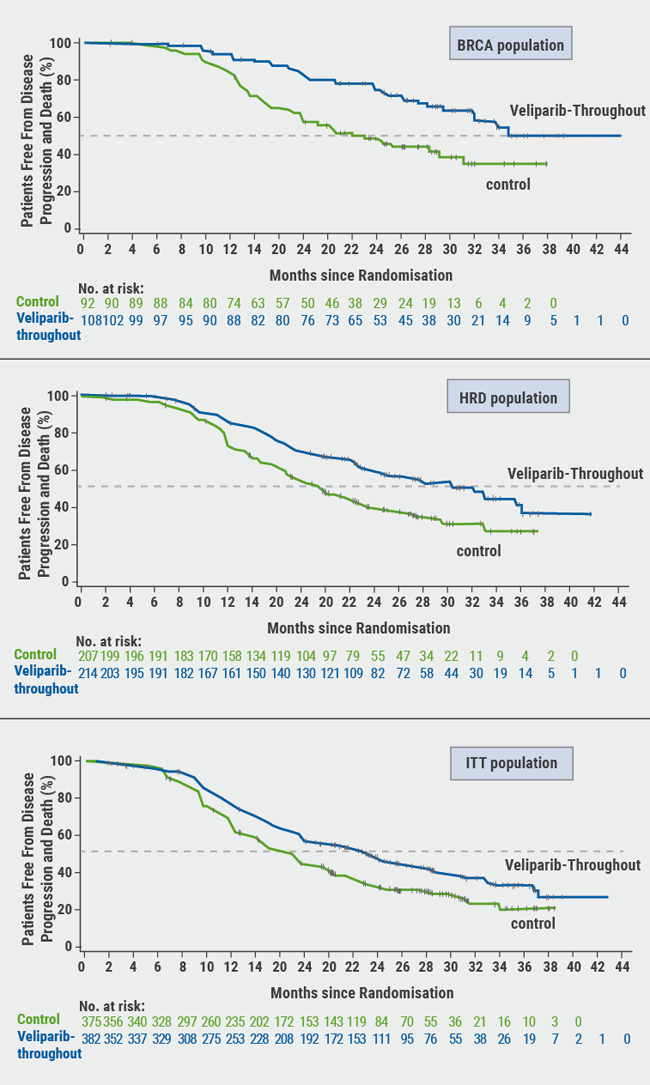