Community-acquired pneumonia (CAP) bears the risk of complications like severe sepsis or acute respiratory failure. A recent study has found different types of microRNA that may anticipate the development of those deteriorations and could easily be tested [1].

The prospective observational study, presented by Dr Francisco Sanz Herrero (University Hospital of Valencia, Spain), included 169 patients with CAP, aged between 58 and 79 years (mean age 66.9 years), all hospitalised in Valencia. A substantial proportion of them had important comorbidities like diabetes (29%), COPD (28.4%), arrhythmia (13.6%), and cerebrovascular disease (8.9%).

During the CAP treatment of these patients, 109 developed a complication. Acute hypoxic respiratory failure (AHRF) and severe sepsis were seen in 25.4% and 13.6% of the study subjects. Real-time PCR testing found a downregulation of microRNA-223 and microRNA-574 that had a high accuracy in predicting the onset of severe sepsis (area under the curve [AUC] 0.78) and AHRF (AUC 0.77). Another endotype linked to profound complications was microRNA-182, also showing high predictive values for sepsis and AHRF with an AUC of 0.83 and 0.76. The mortality of these university hospital-treated patients was 3.6%.

“Our study has been conducted in a hospital setting but could be applied to outpatients too. In addition, due to the range of age of the patients in our study, this could be applied to adult patients of all ages, although we cannot extrapolate the results to children,” concluded Dr Sanz Herrero. These new findings could open the door to a fast-risk prediction for CAP patients as it is widely available, not expensive, and only takes around 1-3 hours before the results are clear.

Figure: The endotype miR-182 is linked to profound complications for sepsis and acute hypoxic respiratory failure (AHRF), the miR-574 expression correlates with the risk of AHRF [1] 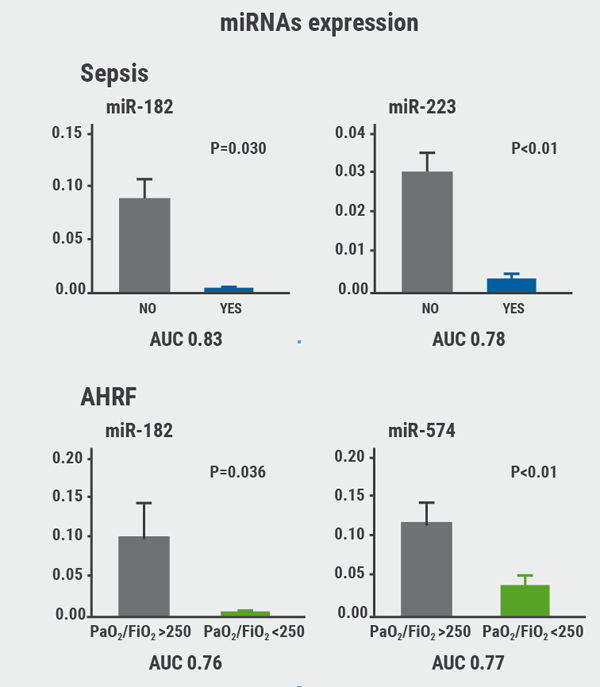