A Japanese trial that investigated the relationship between immunotherapy efficacy and fever suggests a negative impact on disease control and progression free survival (PFS) in non-small-cell lung cancer (NSCLC) patients [1].

Dr Osamu Kanai (Kyoto Medical Centre, Japan) and his fellow researchers questioned the status of fever, an immune-related adverse event, as an advantageous factor [1]. Thus, their single-centre, retrospective study was intended to examine the connection between fever and immune-treatment of NSCLC. NSCLC patients (n=105) were studied from their first dose of nivolumab to their second dose or over 3 weeks. Fever was defined by a 0.2-0.5°C difference between axillary and oral temperature and values over 37°C or a 1°C rise.

Primary outcome to measure treatment efficacy was PFS. In addition, disease control and response rate were evaluated. All patients were also reviewed for concomitant use of corticosteroids, and non-steroidal anti-inflammatory drugs (NSAIDs). A great majority did not have a tumour resection before treatment, nor did they regularly use corticosteroids. Median age of the participants was ~72 years, and 71% were male. Of the patients, 33.3% developed fever, 17.1% of them were female.

As a result of the univariate log-rank test, immunotherapy-induced fever, ECOG-PS ≥2, and regular use of corticosteroids were significantly linked to a shorter PFS (P=0.0353, P=0.0003, and P=0.0251, respectively). In the multivariate analysis, patients with fever had a 74% higher relative risk of an unfavourable influence on PFS (see Figure). The model adjusted for comorbidities such as emphysema, histology (i.e. squamous vs nonsquamous), and current use of corticosteroids. Another factor with a significantly negative impact on PFS was ECOG-PS ≥2 with a hazard ratio of 2.54. Never smoking was also linked to a shorter PFS. The authors argued that the status of immunotherapy-induced fever is associated with immune checkpoint inhibitors, as they think that the fever is not solely caused by an immunological reaction to the tumour cells. In conclusion, they see the appearance of fever after the start of immunotherapy with a checkpoint inhibitor as an independent risk factor for a shorter PFS.

Figure: Multivariate analysis of PFS. Factors with a significant influence on PFS are highlighted in red [1] 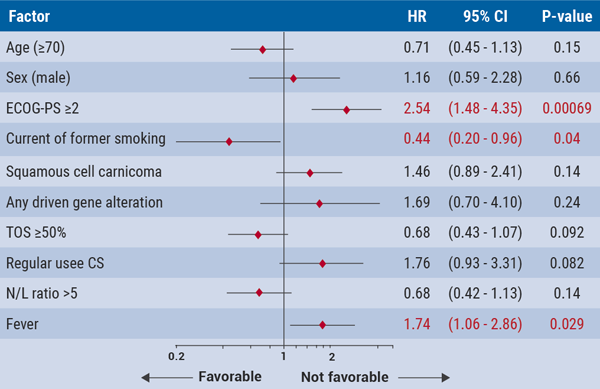