Results from the INBUILD trial show that nintedanib slowed lung function decline in patients with interstitial lung disease (ILD) other than idiopathic pulmonary fibrosis (IPF) by 57% across the overall study population over 52 weeks [1]. Up to now, there are no treatment options for patients with non-IPF.

The tyrosine kinase inhibitor nintedanib is currently approved for the treatment of IPF as a result of the INPULSIS trials [2,3]. Some patients with ILDs other than IPF also develop a progressive fibrosing phenotype, characterised by an increasing extent of fibrosis on high-resolution computed tomography (HRCT), decline in lung function, worsening symptoms, and early mortality [4]. Prof. Luca Richeldi (University of Southampton, United Kingdom) pointed out that preclinical studies have shown that nintedanib inhibits processes involved in the progression of fibrosis, irrespective of the trigger [5]. This suggests that nintedanib may also reduce the progression of fibrosis in patients with non-IPF progressive fibrosing ILDs. This was the rationale for the INBUILD trial, which included adult patients with physician-diagnosed ILD other than IPF. Patients had to exhibit features of a progressive phenotype and were required to meet at least 1 of the following criteria for ILD progression despite management in the 24 months before screening: • Relative decline in forced vital capacity (FVC) of ≥10% predicted. • Relative decline in FVC ≥5% to <10% predicted and worsened respiratory symptoms. • Relative decline in FVC ≥5% to <10% predicted and increased extent of fibrosis on HRCT. • Worsened respiratory symptoms and increased extent of fibrosis on HRCT. Most patients had hypersensitivity pneumonia and autoimmune ILDs of different origin (i.e. rheumatoid arthritis-associated ILD, mixed connective tissue disease-associated ILD, and systemic sclerosis-associated ILD).

A total of 663 patients, of whom 62.1% had a usual interstitial pneumonia fibrotic pattern on HRCT, were randomised to receive nintedanib or placebo. The primary endpoint was the annual rate of decline in FVC (mL/year) assessed over 52 weeks.

The study met its primary endpoint: patients treated with nintedanib had a relative reduction of FVC decline of 57% compared with placebo (P<0.001), which translated into a difference of 107 mL/year between the groups (see Figure). “I was very surprised about this result. Nintedanib was already effective in IPF, but now there was a relative reduction close to 60%. This was even more than we hoped for,” said Prof. Richeldi.

The adverse event profile was consistent with previous studies of nintedanib in ILDs, with diarrhoea being the most common adverse event. 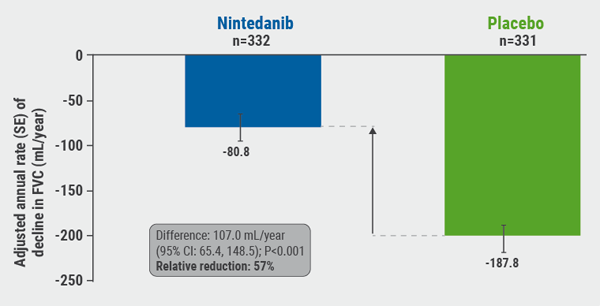 INBUILD Trial Results: We Can NOW Treat a Group of Patients with High Medical Need 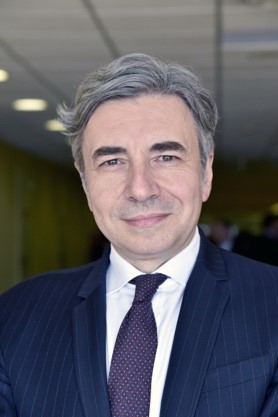 What was the rationale behind the INBUILD trial? Richeldi: We have seen previously that the drug nintedanib is safe and effective for idiopathic pulmonary fibrosis (IPF). Nonetheless, beside this disease there are a huge number of other secondary interstitial lung diseases (ILDs). Those patients have a high unmet need. All these diseases share a final self-sustaining fibrotic pathway, no matter what the original trigger was, for example asbestos-related, or due to a chronic hypersensitivity pneumonitis. Therefore, we believed that nintedanib could also be effective in ILDs from other causes.

What was the most important result of your trial?

Richeldi: For me the most important result was that we could show that pulmonary fibrosis is responsive to this drug across different disease forms. We enrolled patients with a broad range of fibrosing interstitial lung diseases, which were identified based on the presence of pulmonary fibrosis on chest imaging and common progressive clinical features.

Thus, nintedanib is not only effective for the idiopathic form of pulmonary fibrosis, but it is slowing progression over the whole spectrum of ILDs, including the secondary forms. This is the first time this was shown. It suggests that there is a common pathobiological mechanism, regardless of clinical diagnosis, that is shared by all progressive fibrosing ILDs. This is in line with the observation we made in the INBUILD trial, that the rate of decline in the forced vital capacity (FVC) in placebo-treated patients with other, non-usual interstitial pneumonia (UIP)-like fibrotic pattern was only slightly lower than that in patients with UIP-like fibrotic patterns. Clinically important is that we now have a possibility to treat a group of patients that we could not offer any treatment up to now.

What is the future goal in the management of ILDs?

Richeldi: At the moment we can only slow progression of these diseases. However, there are many interesting drugs in the pipeline. I hope that in the future we can offer our patients more effective combinations, similar to what is done in oncology. Our goal is not only to slow progression but to reach stabilisation of the disease.