Different studies have shown that e-cigarettes are not successful aids to smoking cessation. In most cases, e-cigarettes lead to dual use: smokers consume e-cigarettes in addition to conventional cigarettes.

Prof. Jørgen Vestbo (University of Manchester, United Kingdom) pointed out that industry has been claiming that smokers cannot or will not quit smoking. Yet, most smokers actually do want to quit and a high proportion dislikes being nicotine dependent [1]. Most smokers today already smoke less cigarettes daily and are more motivated than before to quit.

It has also been stated that alternative nicotine delivery products are highly effective as a smoking cessation aid, but evidence for this claim are lacking. On the contrary, a review of 38 studies concluded that the odds of quitting cigarettes were even 28% lower in those who used e-cigarettes compared with those who did not use e-cigarettes [2]. No matter whether smokers were motivated to quit or not, the e-cigarettes did not help them in the trials evaluated in the review (see Figure). The value of alternative nicotine delivery products as tool for smoking cessations was also evaluated in a recent randomised controlled trial including 886 smokers [3].

Practice study confirms that e-cigarettes mainly lead to dual use

Figure: E-cigarettes have no benefit in smoking cessation [2] 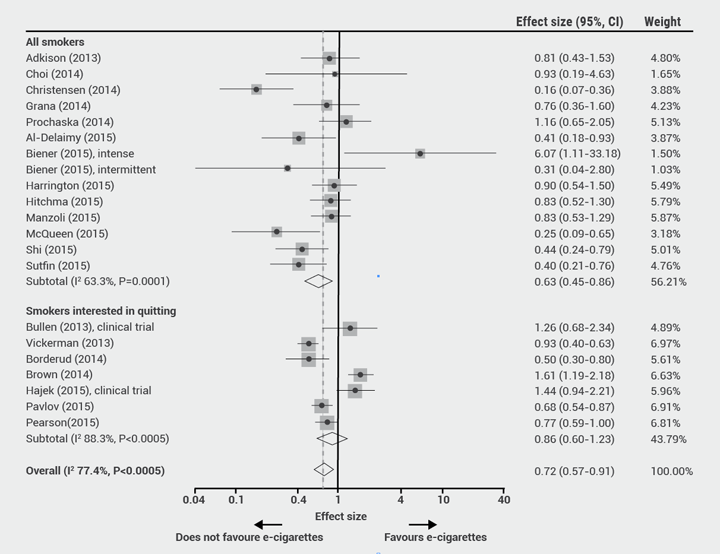 This was also shown in a Swedish survey presented during the ERS 2019 congress [4]. “E-cigarettes have been around for 10 years now. Unfortunately, they also seem to appeal to nonsmokers, especially teenagers,” said Prof. Linnéa Hedman (Umeå University, Sweden). Her study aimed to find predictors for e-cigarette use and whether the use of e-cigarettes can really change smoking habits.

In 2006, Prof. Hedman sent a postal questionnaire to a random sample of adults aged 20 to 69 years. Data was collected on smoking habits, respiratory symptoms, sex, and occupation. Another questionnaire was sent 10 years later to the same people (now aged 30–79 years). This time the questionnaire also included a question on e-cigarette use. Of the original cohort, 81% returned the questionnaire. Data from 8,424 participants could be analysed in the study [4].

According to the follow-up questionnaire, 0.9% of participants used e-cigarettes; most of them were former smokers. Factors associated with e-cigarette use was young age (20–29 years) and current smoker. The latter had a more than 34-fold elevated risk to use e-cigarettes compared with non-smokers. At follow up, 225 patients had quit smoking, but only 1 of them used e-cigarettes to do so. Of the e-cigarette users, 82% were persistent smokers. Among this group, 69% of smokers had not changed their daily number of cigarettes, 11% had increased it, and 20% decreased it.

“This study is only confirming again that e-cigarettes are no smoking cessation device, and that smokers are boosting their nicotine intake by e-cigarettes,” concluded chairman Prof. Elif Dağlı (University of Istanbul, Turkey).