By 2020, chronic obstructive pulmonary disease (COPD) is projected to become the third leading cause of death worldwide [1]. Every year, more than 3 million people worldwide die due to this chronic condition. Patients with COPD have a significantly shorter survival than comorbidity-matched controls [2]. Most common causes of death in patients with COPD are non-respiratory, particularly cardiovascular diseases (myocardial infarction and stroke) and cancer [2]. Previous exacerbations and hospitalisations, comorbidities, reduced lung function, and poor health status are the strongest predictors of death in patients with COPD [3]. Although the treatment of symptoms and prevention of acute exacerbations has improved, few advances have been made to stop disease progression or prevent mortality. To reduce disease burden, smoking cessation, increasing physical activity, and early detection and treatment of comorbidities are essential. A global political and economic effort to reduce tobacco use, to regulate environmental exposure, and to find alternatives to the massive use of biomass fuel are urgently needed, so that COPD will not remain a major healthcare problem. To date, no pharmacological treatment has convincingly demonstrated a significant survival benefit in patients with COPD [4]. For the maintenance treatment of adult patients with moderate-to-severe COPD who are not adequately treated by a combination of an inhaled corticosteroid (ICS) and a long-acting β-agonist (LABA), several triple combinations are in development. Some of them became available recently.

The fixed-dose combination of an extrafine inhalation solution formulation of the ICS beclomethasone dipropionate, the LABA formoterol fumarate, and the long-acting muscarinic antagonist (LAMA) glycopyrronium is EMA-approved since July 2017 for maintenance treatment of patients with moderate-to-severe COPD who are not adequately treated by ICS/LABA [5]. In three landmark phase 3 randomised controlled trials (RCTs; TRILOGY, TRINITY, and TRIBUTE) this triple therapy reduced moderate-to-severe COPD exacerbations compared to the LAMA tiotropium, the combination of the ICS beclomethasone dipropionate plus the LABA formoterol fumarate, and the combination therapy of the LABA indacaterol and the LAMA glycopyrronium in patients with (very) severe airflow limitation at risk of exacerbations, i.e. with ≥1 exacerbation in the previous year [6-8]. However, the effect of this triple therapy on mortality in patients with COPD remains unexplored.

A pooled analysis of fatal adverse events (AEs) in the safety populations from TRILOGY, TRINITY, and TRIBUTE, was conducted by Prof. Leonardo Fabbri (University of Modena and Reggio Emilia, Italy) and others. Time to death was analysed using a Cox proportional hazards model, including only the effect of treatment. Hazard ratios (HRs) of all comparisons between extrafine ICS-containing regimens and ICS-free treatments were calculated [6-9]. The pooled results suggest that treatment with extrafine ICS-containing medications compared to ICS-free treatments may be associated with a lower rate of mortality, which is driven by non-respiratory events, in symptomatic patients with COPD and (very) severe airflow limitation who are at risk for exacerbations. Only with respect to the incidence of non-respiratory deaths, the difference was statistically significant. A lower rate of mortality was also observed in ICS-containing treatment arms compared to non-ICS containing treatment in the IMPACT study [10] and in a pooled analysis from 7 previous RCTs involving more than 5,000 patients with stable COPD [11].

Nevertheless, given the unidirectional effects seen in the analysis of TRILOGY, TRINITY, and TRIBUTE [6-9], there may be reason for more optimism regarding the effect of more intense ICS-containing treatments on survival in symptomatic patients with (very) severe COPD. Particularly considering that combination therapy, and especially triple therapy, is almost invariably required in these patients either to improve symptoms, quality of life, and/or to reduce exacerbations and hospitalisations [12]. Prof. Fabbri ended his lecture by mentioning that a properly designed and powered new study with mortality as primary outcome in these patients is required for this optimism to be confirmed.

Exacerbation frequency is relatively low in RCTs, even in studies including exacerbating COPD patients [13]. “So, we need large patient numbers and trials of long duration to show a treatment effect on exacerbations”, mentioned Dr Konstantinos Kostikas (Novartis Pharma, Basel, Switzerland). It would be valuable to identify which patients will likely benefit in terms of exacerbation prevention. The FLAME investigators developed a composite endpoint, called early clinical important improvement (ECII), which is defined as the clinically relevant improvement in both lung function (trough FEV1) and one in seven patient-reported outcomes (PROs), determined at 4 or 12 weeks. The current analysis evaluated whether this novel composite endpoint would be a valuable predictor of exacerbation risk during the subsequent follow-up [14]. The FLAME study directly compared the LABA indacaterol (110 μg) plus the LAMA glycopyrronium (50 μg) once-daily with the LABA salmeterol (50 μg) plus the ICS fluticasone (500 μg) twice-daily [13]. Approximately 18-21% of patients achieved ECII at week 4 or 12 post-randomisation, which was dependent on the ECII definition. More patients achieved ECII during treatment with indacaterol/glycopyrronium compared with salmeterol/fluticasone according to the three evaluated ECII definitions at week 4 (Figure 1).

Figure 1: Percentage of patients who achieved ECII with indacaterol/glycopyrronium compared with salmeterol/fluticasone according to ECII definitions at week 4 [14] 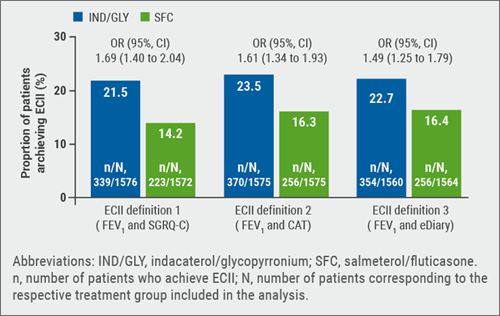 ECII is a novel composite endpoint based on the clinically relevant improvement in lung function and a patient-reported outcome in the early phase of a treatment intervention that may predict subsequent exacerbation risk. ECII may be useful both in clinical trials and in clinical practice as an early objective measure of how patients will respond to specific treatments in terms of exacerbations. Dr Kostikas indicated that further validation of ECII in other datasets and in prospective trials is needed in order to define the potential clinical application of this composite endpoint.

IMPACT is a phase 3, 52-week, randomised, double-blind, three-arm parallel group study in symptomatic COPD patients, in which once-daily inhaled triple therapy with the ICS fluticasone furoate, the LAMA umeclidinium, and the LABA vilanterol was compared with once-daily dual therapies of fluticasone/vilanterol and umeclidinium/vilanterol. IMPACT demonstrated that this triple therapy reduced moderate-to-severe exacerbations, and improved lung function and health status, measured by the St George’s Respiratory Questionnaire (SGRQ), compared with both mentioned dual therapies. The safety profile of fluticasone/umeclidinium/vilanterol triple therapy was consistent with the profiles of the component drugs. These results were published earlier this year in the NEJM [10]. In the IMPACT trial, SGRQ and Patient Global Impression of Change (PGIC) were used to measure health-related quality of life and patient impression of change. Through mapping change in SGRQ total score against PGIC, these synchronised measurements of SGRQ and PGIC allowed different levels of response to be defined. Triple therapy demonstrated clinically meaningful benefits in SGRQ total and domain scores vs both dual therapies (Figure 2). Both moderate and major responder rates also favoured triple therapy [15]. 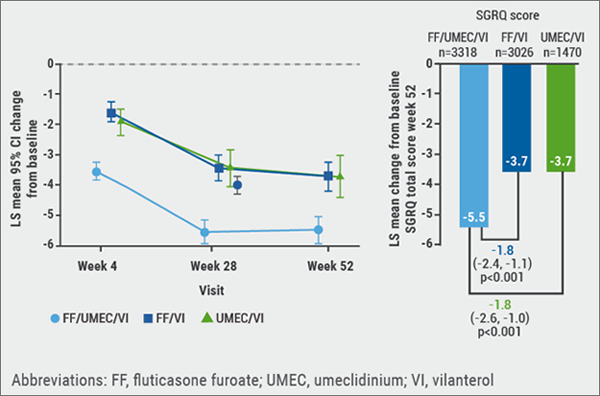