Based on growing insights into the underlying mechanisms of asthma during the past 3 decades, our look on asthma has evolved from the archetypic ‘’generalistic’’ syndrome to distinct disease subsets [10-12]. As in most diseases, the clinical expression (phenotype) of the different asthma subsets results from the combined effect of an individual’s genome and exposome (environmental exposures, microbiome, stress, life style, antibiotics) and their interactions [13]. Consequently, asthma should in fact be evaluated and subsequently treated at several levels: i.e. clinical (age of onset, comorbidities, systemic presentations); anatomical (e.g. bronchiectasis, small airways disease/airway remodelling); physiological (e.g. airway narrowing, (non-)reversibility, airway hyperresponsiveness, airway trapping, ventilation, hypoxemia); and immuno-inflammatory (cells, cytokines, mediators, molecular components) (Figure 1).

The involvement of small airways, characterised by distal lung inflammation and remodelling, is present in a large proportion of patients and is often a hidden cause of more severe asthma associated with a reduced response to standard therapy and a worse control [16-19]. Therefore, active identification (and subsequent treatment) of these 3-D anatomical site-specific phenotypes should be part of the assessment of severe (uncontrolled) asthma. 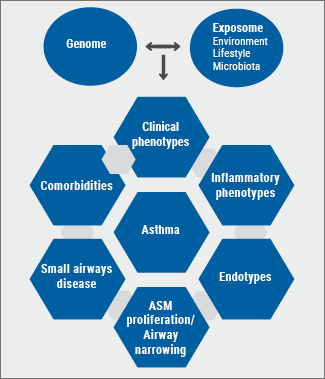 At the end of the last century, insights into the effects of a Western lifestyle on the immune system, complemented with animal data, led to the paradigm of asthma as mainly a T-helper type2 (Th2)-driven disease with eosinophils as key players. In the late 1990s/beginning of 2000s, development and validation of non-invasive airway sampling techniques to assess airway inflammation (especially hypertonic saline induced sputum) [22] allowed identification of inflammatory subsets (phenotypes) in asthma: i.e. eosinophilic, neutrophilic, mixed, and pauci-granulocytic phenotypes [23]. Several "early" studies in (more) severe asthma pointed towards the clinical value to discriminate between non-eosinophilic asthma and eosinophilic asthma, the latter being more frequently associated with more severe exacerbations and accelerated lung function decline [24-26]. As eosinophilic inflammation is generally well-responding to corticosteroids, an RCT showed that guiding (ICS) treatment by levels of sputum eosinophils in moderate-to-severe asthma patients resulted in fewer exacerbations as compared to a standard (British Thoracic Society) treatment regimen based on clinical symptoms and signs [27].

More recently, in a study of patients with mild-to-moderate asthma, gene expression analyses provided insight into the underlying molecular pathways and revealed two distinct profiles, i.e. a Th2-high and a Th2-low profile based on the expression of IL-13-inducible genes. In contrast to Th2-low patients, those with a Th2-high profile responded well to ICS [28].

In the past decade, emerging evidence pointed towards a key role of the innate immune system in the pathophysiology of type2 asthma [29]. The epithelial cytokines (so-called alarmins) IL-25, IL-33, and thymic stromal lymphopoietin (TSLP) are considered to initiate the type2 immune response by activating the innate lymphoid cells (ILCs: ILC1, ILC2, ILC3). Similarly to their ‘’adaptive counterparts’’, the Th2 cells, activated ILC2s contribute to the immune response in asthma by the release of T(h)2 (now termed type2 or T2) cytokines IL-4, IL-5, and IL-13 [30], thus linking innate and adaptive immunity [31]. Furthermore, both cell types can be activated by cysteinyl leukotrienes (CysLTs) and prostaglandin (PG)-D2 through interaction with the respective receptors (CysLT1R and DP2/CRTH2) on their cell surface [32,33].

Type2 cytokines are key elements in the immunopathology of eosinophilic asthma which is present in approximately 50% of the asthma population [34]. IL-5 is involved in eosinophil maturation, release from the bone marrow and subsequent recruitment into the airway, while IL-4 and IL-13 are mainly involved in, respectively, IgE synthesis, eosinophil chemotaxis, mucus production, airway hyperresponsiveness, airway narrowing, and remodelling (subepithelial fibrosis, airway smooth muscle proliferation) [35].

Recent evidence from in vitro studies suggests that corticosteroid subsensitivity in ILC2 can be induced by exposure to TSLP, a dexamethasone-regulated IL-7R alpha ligand [36]. In line with this finding, increased numbers of ILC2s have been found in patients with more severe and often corticosteroid-insensitive or -resistant asthma [37,38]. These data support why type2 asthma is often associated with corticosteroid subsensitivity, and therefore requires either treatment with oral corticosteroids or targeted therapies with monoclonal antibodies [39]. Additionally, recent evidence showed that IL-13 may desensitise beta2-receptors in human airways, which further underscores the urge of alternative treatments in type2 asthma [40].

It has been suggested that non-T2 or T2-low asthma is present in approximately 50% of (adult) patients, has usually a less severe nature, and consists of several different phenotypes and endotypes (a disease subtype defined by a distinct molecular mechanism). Triggers include infections, occupational irritants, and oxidative stress. The mechanisms of non-type2 asthma are not well understood, but may comprise neutrophilic inflammation, Th17 pathway, neurogenic inflammation, barrier defects, airway smooth muscle abnormalities, etc. [35]. Therefore, these asthma subsets usually show a modest or no response to corticosteroids or T2-targeted therapies, while biomarkers and targeted treatment are presently unavailable and, hence, an unmet need.

Airway neutrophilia, often reflecting an underlying respiratory tract infection, can be treated with macrolides, while predominant airway hyperresponsiveness or airway narrowing without a clear inflammatory component can be addressed with bronchodilators or bronchial thermoplasty [41].

However, changes in clinical presentation within individual patients over time are consistent with observations that the underlying immune/inflammatory responses may vary over time and that different inflammatory phenotypes can co-exist in one patient [42]. Hence, regular re-evaluation of an individual’s disease status remains important.