Relation between gastroesophageal reflux and IPF

There is a possible relationship between abnormal gastroesophageal reflux (GER) and the development or progression of IPF, and risk of acute exacerbation. The hypothesis is that, in a genetically predisposed person, recurrent injury to epithelium caused by micro-aspiration of contents of gastric juice (refluxate), leads to alveolar damage and pulmonary fibrosis and ultimately to the manifestation of (pre-existing) IPF. “GER has a high prevalence in this patient population, so we need to prevent micro-aspiration”, concluded Prof. Raghu based on this concept. Retrospective data showed that Nissen fundoplication, a laparoscopic surgical procedure to treat gastroesophageal reflux disease (GERD), improves survival. Prof. Raghu and others undertook a multicentre, randomised, controlled phase 2 trial, the WRAP-IPF study. The results were published recently in The Lancet Respiratory Medicine [13]. The WRAP-IPF trial determined whether treatment of abnormal acid GER with laparoscopic anti-reflux surgery reduced the rate of disease progression of IPF. Patients with IPF, abnormal acid GER (DeMeester score of ≥14.7), and preserved FVC were recruited from 6 academic centres in the USA. Concomitant therapy with nintedanib and pirfenidone was allowed. Of the 72 originally screened patients, 58 patients randomly received surgery or no surgery. A total of 27 patients in the surgery group and 20 patients in the no surgery group had an FVC measurement at 48 weeks (P=0.041). The primary endpoint was change in FVC from randomisation to week 48. Intention-to-treat analysis (adjusted for baseline anti-fibrotic use) demonstrated an adjusted rate of change in FVC over 48 weeks was:

Acute exacerbation, respiratory-related hospitalisation, and death was less common in the surgery group, but the difference was not statistically significant. The time to composite endpoint was significantly different (Figure 2).

Figure 2: Kaplan-Meier estimates of time to the composite endpoint of 10% decline in FVC or death in the WRAP-IPF study 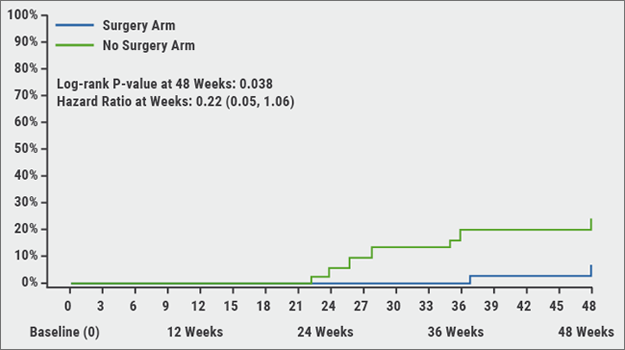 Based on the published reports of clinical trials since 1991, Prof. Raghu summed up some lessons learned. “First, we have learned that what works or worked at the bench and is biologically plausible does not necessarily work at the bedside”, he stated. “Standard physiological/clinical assessment of disease progression is still the current standard of assessment of treatment response.”

With respect to the treatment of IPF, he mentioned the following take-away: “Preventive measures might minimise risks for micro-aspiration. Cellular, molecular, and genetic biomarkers are being considered to stratify treatment in new clinical trials. Recent pharmacogenomic data from a subgroup of patients participating in the PANTHER trial is encouraging for the use of NAC in some patients, based on a specific genotype [14].” In the IPF treatment guidelines, there are currently no pharmaceutical treatments with a “strong yes” recommendation (Table 1). “This void needs to be filled in, hopefully based on the finding of new clinical trials.”

Table 1: Treatment recommendations in the 2015 international guidelines for the treatment of IPF [5]

‘Yes’ recommendations mean: The majority of patients would want the intervention, but a significant minority would not.

‘No’ recommendations mean: The majority of patients would not want the intervention, but a significant minority would.