The prevalence of asthma is increasing worldwide. However, asthma control is suboptimal in many patients. Worldwide, 250,000 lives are lost annually due to asthma. 80% of costs are driven by 20% of asthma population [14]. The pathogenesis of asthma is characterised by “an inflammatory soup”, explained Prof. Pallav Shah (Imperial College London, UK). “We start treatment with inhaled corticosteroids (ICS), but some patients become steroid dependent. We need to find those patients, because they have a high disease burden and account for the majority of costs for asthma care.”

Prof. Shah described some endoscopic treatments for severe and/or refractory asthma patients. During bronchial thermoplasty, airway smooth muscle and bronchial epithelial cells are exposed to media (37-70°C) for 10 seconds, to mimic thermoplasty [15]. These interventions have been studied in a spectrum of asthma patients, for example in AIR2 [16] and a couple of years later in PAS2 [17] (Table 5). 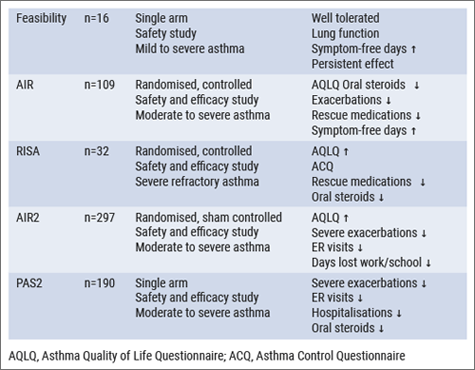 An important aspect of these interventions is the short-, medium-, and long-term safety:

With respect to the short-term safety of bronchial thermoplasty, respiratory AEs were transient, typical of airway irritation, and included symptoms of worsening asthma, such as cough, wheeze, increased sputum production, chest pain, and dyspnoea. The median time to onset was 1 day and the median time to resolution was 7 days. All AEs resolved with standard care and no unanticipated device-related AEs occurred. The severity increased with increasing severity of asthma. The medium-term safety is characterised by improvements in Asthma Quality of Life Questionnaire (AQLQ), severe exacerbations, emergency room visits, and days lost from work, school, and/or other activities. During long-term follow-up, respiratory AEs were lower for patients who received bronchial thermoplasty, compared to sham-treated patients.

“Everyone wanted to know the long-term safety profile of these interventions”, said Prof. Shah. A comparison of the CT scans at baseline versus 1-5 years after bronchial thermoplasty showed no clinically significant findings for any of the CT pairs and no evidence of bronchiectasis, thus supporting long-term safety of the procedure.

The parasympathetic nervous system has an important role in the pathogenesis of asthma. In targeted lung denervation, the parasympathetic nerve signalling to and from the lungs is disrupted. The resulting decreased release of acetylcholine provides an ‘always-on’ effect, leading to relaxation of the basal airway tone and a decreased mucus production. Furthermore, the blunted nerve hyper-responsiveness after the denervation reduces the tendency to exacerbate. The term ‘targeted’ in this intervention refers to the fact that it is anatomically restricted to the lung, at the depth where the airway nerves are located. Another new technique, which was also discussed by Dr Karin Klooster (University Medical Center Groningen, the Netherlands), is epithelial re-surfacing using a cryospray (RejuvenAir procedure). It utilises a spray of low-pressure liquid nitrogen to quickly freeze the endobronchial tissue at -196°C with a pre-determined dose which ablates the epithelium, hyperplastic goblet cells, and secretory glands, resulting in remodelling/regeneration of neo-mucosa and cilia for more normal mucous production and clearance.