Up to approximately 2010, there were only a few therapeutic options for patients with (non-)small-cell lung cancer (SCLC and NSCLC), i.e. surgery, radiotherapy, and chemotherapy. “Since then, two therapeutic revolutions based on our understanding of the tumour biology occurred”, added Dr Mascaux. “The first one is the development of targeted therapies against different oncogenic drivers.” This coincided with a paradigm shift: from a 'one size fits all' strategy to a personalised strategy, in which the targeted drug was chosen based on the characteristics of the tumour cells, such as genetic alterations.

The development of targeted treatment for (N)SCLC started with the inhibition of the epidermal growth factor receptor (EGFR) [1]. Activation of EGFR induces the activation of various metabolic pathways, leading to survival of the tumour cells, increased proliferation, and less apoptosis (programmed cell death). In 2004, several EGFR mutations were discovered. These mutations could confer a higher sensitivity for treatment with EGFR-directed tyrosine kinase inhibitors (EGFR-TKIs). Furthermore, it was discovered that these mutations are associated with several clinical characteristics. They were more frequently detected in females, patients with adenocarcinoma, Asian people, and non-smokers. However, still only 60% of patients with these characteristics will have an EGFR mutation, and patients with other characteristics can also have an EGFR mutation-positive tumour. During the development of an increasingly personalised treatment of lung cancer patients, IPASS was the first trial showing that the best treatment for patients could be chosen by using a biomarker. In the IPASS trial, it was found that the progression-free survival (PFS) in EGFR mutation-positive and -negative patients was significantly different (P<0.0001) [2]. Based on these findings, Dr Mascaux advised to give an EGFR-TKI instead of chemotherapy in the first-line setting in case of an EGFR mutation-positive NSCLC. “In contrast, if this mutation is not present, you should better give chemotherapy and not an EGFR-TKI.” These data have meanwhile been confirmed in clinical trials studying other EGFR-TKIs.

There are different types of EGFR mutations. Some are associated with sensitivity for certain drugs, such as a deletion in exon 19 and 21, while other mutations are associated with resistance. The most frequently detected resistance-associated mutation is T790M, located in exon 20, which leads to secondary resistance after first- or second-line treatment with an EGFR-TKI. In clinical studies, third generation EGFR-TKIs were found to inhibit T790M-mutated tumours with a very high sensitivity. The first trial showing this effect, was AURA3. After a median follow-up period of 8.3 months, PFS was significantly longer in the osimertinib group than in the platinum–pemetrexed group (median 10.1 months vs 4.4 months; HR after adjustment for Asian or non-Asian race, 0.30; P<0.001) (Figure 1) [3]. “The combination of different lines of EGFR-TKI therapy has a more than additive effect”, mentioned Dr Mascaux. “The PFS would not increase to 10 plus 10 months, but the patient can reach a PFS of 50 months.”

Figure 1: PFS in the intention-to-treat population of the AURA3 study (primary endpoint) [3] 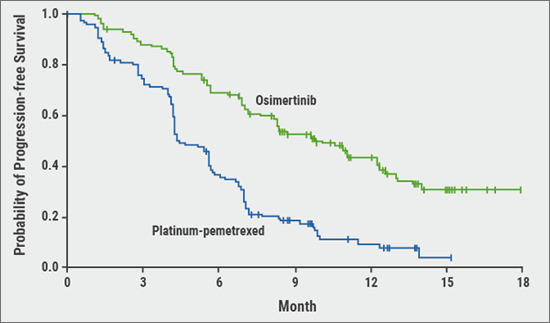 Subsequently, osimertinib has been tested in the first-line setting. In the FLAURA study, osimertinib was compared with a standard of care EGFR-TKI, either gefitinib or erlotinib, as first-line treatment in patients EGFR-mutated advanced NSCLC. The median PFS was 18.9 months for osimertinib vs 10.2 months for standard of care (HR 0.46; P<0.0001) [4]. The PFS has progressively increased using first-, second- and third-generation EGFR-TKIs (Figure 2). Fourth-generation TKIs are still under development, and while they may already be efficacious they are not yet used in the clinical setting.”

Loss of T790M does not indicate re-sensitisation to a first-generation EGFR-TKI, but often indicates overgrowth of a competing resistance mutation. Dr Mascaux advised to look out for a range of rare genetic resistance mechanisms, such as KRAS mutations, RET fusions, and FGFR fusions.