Immuno-oncological (I-O) agents as monotherapy have shown superior efficacy compared to chemotherapy in both first- and second-line setting, with a consistent benefit in overall survival (OS) and a more favourable tolerability profile in high PD-L1 patients.

There are three main reasons why we should discuss immuno-oncological (I-O) agents as monotherapy in non-small cell lung cancer (NSCLC). Firstly, I-O monotherapy has become a standard therapy in the second-line setting. “Some trials comparing an immune checkpoint inhibitor (ICI) as monotherapy with chemotherapy, showed a consistent benefit in OS favouring I-O monotherapy [1,2]”, Prof. Martin Reck (Airway Research Center North, Grosshansdorf, Germany) said at the beginning of his lecture. Furthermore, there is a clear correlation between a biomarker, i.e. PD-L1 expression, and the efficacy of I-O monotherapy. “This correlation is found across all agents we have investigated. In case of pembrolizumab (anti-PD-1), PD-L1 expression ≥50% is found to be a predictive marker for a pronounced activity of checkpoint inhibition.” The OS data, published in 2015 in NEJM [3], were amazing according to Prof. Reck. Finally, he thinks that monotherapy represents a really attractive concept of treatment, that pulmonologists already use in targeted therapies of patients with lung cancer harbouring oncogenic alterations, such as EGFR mutation or ALK translocation.

I-O monotherapy offers patients some (potential) advantages. First, it offers a chance of a chemotherapy-free systemic treatment. Furthermore, it could improve tolerability, i.e. with a lower risk of treatment-limiting adverse events compared with chemotherapy, also in the long term. In addition, there is a chance of improved symptomatic efficacy, i.e. improved quality of life and symptom control, and of an improved maintenance of patient’s health status in a palliative treatment setting. However, the selection of appropriate patients will be key to use I-O monotherapy.

From unselected to highly selected patients in first line

Afterwards, Prof. Reck mentioned the clinical data which were published in the last couple of years evaluating I-O monotherapy. The first trials have been performed in slightly selected patient populations, namely in patients with PD-L1-positive tumours.

The CheckMate 026 trial compared nivolumab monotherapy with platinum-based chemotherapy in patients with PD-L1-positive NSCLC. The PFS in patients with PD-L1 expression of ≥5% was not significantly different in these two treatment arms (4.2 months vs 5.9 months, respectively; HR for disease progression or death 1.15; 95% CI 0.91-1.45; P=0.25) [4]. “Of note, there was a disbalance between the two treatment groups with respect to the number of patients with high PD-L1 expression”, Prof. Reck added, “with a lower number in the nivolumab compared with the chemotherapy arm.”

Another trial which was presented at the ELCC meeting, was the phase 3, global, randomised, open-label, multicentre MYSTIC study [8]. This trial compared durvalumab monotherapy, the combination of durvalumab and tremelimumab (anti-CTLA-4) and standard-of-care platinum-based chemotherapy in previously untreated patients with stage 4 (metastatic) NSCLC. “Despite a crossing of the OS curves (see Figure), there was a signal favouring the treatment with durvalumab (anti-PD-L1) compared to chemotherapy. However, based on the statistical design of the study, this was not considered as a significant treatment benefit.”

Figure: OS in patients with PD-L1 expression of ≥25%: primary endpoint of MYSTIC trial [8] 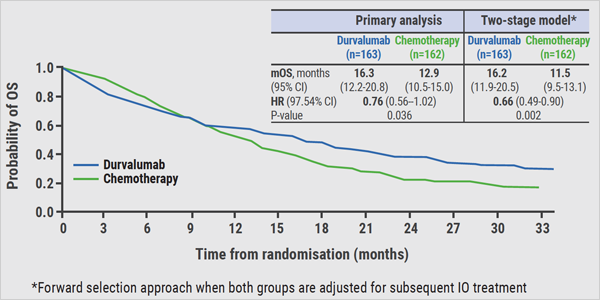 Besides PD-L1 expression, researchers are looking for additional markers which might help to identify those patients benefiting from immunotherapy. One of the markers which is currently under heavy investigation, is tumour mutational burden (TMB). PD-L1 expression and TMB were found to be two completely independent markers.

In CheckMate 026, there was a more pronounced survival benefit in patients with high TMB [9]. The Checkmate 227 trial evaluated nivolumab plus ipilimumab in lung cancer with a high TMB [10]. “This picture was not so clear, with a crossing of the Kaplan-Meier curves”, Prof. Reck mentioned “Maybe a cut-off of tissue-based TMB ≥13 mutations per megabase (mut/MB) is not optimal in this setting.” In the MYSTIC trial, using a very sharp cut-off of ≥20 mut/MB, a very clear signal for the combination of durvalumab and tremelimumab was found compared to chemotherapy with respect to PFS and OS. Furthermore, an improved efficacy of durvalumab compared to chemotherapy was found (with respect to OS: HR 0.72). “We need more prospective data to find out if this effect is clinically meaningful”, Prof. Reck warned. The B-F1RST trial is currently evaluating first-line atezolizumab in patients with previously untreated, advanced NSCLC. A recently presented interim analysis showed that outcome is related to blood-based TMB [11]. Taken together, he thinks that TMB could be an interesting marker in the evaluation of I-O monotherapy in clinical trials.

According to Prof. Reck, I-O monotherapy could be an attractive option for patients with reduced performance status (PS ≥2), not eligible for platinum-based chemotherapy. “However, we have to be a little bit cautious, because all the data we have seen so far is coming from prospective randomised trials. All trials were restricted to patients with a good performance status (PS 0 or 1). So, we urgently need a prospective evaluation of I-O monotherapy compared to chemotherapy in less fit patients.” One of these ongoing trials is IPSOS, in patients with advanced NSCLC and PS 2-3.

How can societies help to implement personalised treatment?