“I have the impression that in the lung cancer field, there is a striking discrepancy between what we can do in terms of molecular medicine and what patients really have access to”, Prof. Jürgen Wolf (University Hospital of Cologne, Germany) stated at the beginning of his lecture. In Germany, a bottom-up approach was applied with respect to the implementation of personalised lung cancer care.

Systemic therapy of advanced NSCLC is increasingly molecularly guided. “This not only holds true for the trial setting, but also for the use in daily practice of an excitingly increasing numbers of new targets”, Prof. Wolf stated. Regarding immunotherapy, he expects that next to PD-L1 also other markers will be implemented. Personalised treatment has been found to prolong survival substantially, “not only one or two months, we know from the era of chemotherapy, but a yearlong survival in patients with EGFR-positive NSCLC”, Prof. Wolf said based on own results published in 2013, evaluating first-generation EGFR and ALK tyrosine kinase inhibitors (TKIs) [1]. Comparable results were found in the USA [2] and in France [3].

What is the reality currently in Germany? Molecular test rates are not acceptable in Germany, according to Prof. Wolf. In an evaluation of the approximately 1,700 hospitals and 580 private practice-based oncologists treating cancer patients in Germany, it was found that despite the presence of a powerful healthcare system, the transfer of innovation is problematic. There are a couple of challenges for the implementation of personalised cancer care into clinical routine, such as: • Implementation of high-quality molecular multiplex diagnostics, i.e. signature testing and sequencing; • State-of-the-art consultation with regard to therapeutic consequences; • Rapid innovation transfer from the academic centres into broad cancer patient care; and • Evaluation of post-approval and off-label personalised therapies.

In 2010, the Network Genomic Medicine was founded with funding from the Ministry for Innovation and Research. “This is a kind of bottom-up approach”, Prof. Wolf said about this initiative in his own country. The aim was not only to diagnose, but also to treat patients in a personalised manner, in case a molecular aberration is detected. So, to treat all patients according to the genetic vulnerability of her/his tumour. In Germany, this aim was pursued by the implementation of a general rebiopsy program, in which routine clinical care fosters research and vice versa.

With respect to the reimbursement structures for molecular diagnostics in Germany, Prof. Wolf mentioned that there is a strict separation of the inpatient and outpatient sector. In the inpatient sector, like in many European countries, financing is based on the Diagnosis Related Groups (DRG)-system. In Germany, the average lung cancer DRG is approximately 2,500-3,500 euro. “The molecular diagnostics have to be paid with this amount of money, which is not enough”, according to Prof. Wolf. In the outpatient sector, financing is determined by the Committee on the Physicians’ Fee Schedule. The proposed reimbursement for molecular tests (i.e. EGFR and BRAF sequencing, ALK immunohistochemistry, ROS1 fluorescence in situ hybridization, and PD-L1 immunohistochemistry) is around 700 euro. This means there is a cost-covering reimbursement for NGS-based molecular diagnostics in Germany. The major health-insurance companies participate in this network. The plan is to extend the current network into a nationwide platform and to create a centralised tumour board, deciding on harmonised recommendations (see Figure).

Figure: Vision of Prof. Wolf for the diagnosis and treatment of all patients with lung cancer 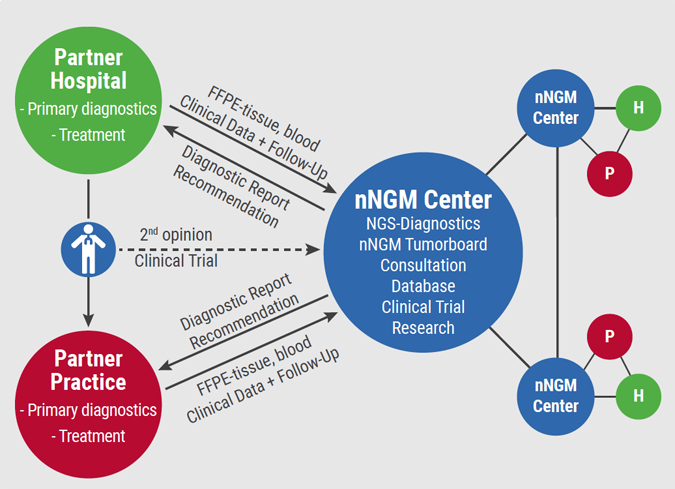 How can societies help to implement personalised treatment?