Deep remission is often the goal in treating inflammatory bowel disease (IBD), now that treatment has significantly improved in the past few years due to new targeted biologic therapies, the optimisation of older therapies, and a better understanding of the pathogenesis. But what is the impact of achieving endoscopic and deep remission on the natural course of IBD in the long term? Study results have shed more light on this important issue, most notably the follow-up data of the CALM study.

A retrospective analysis of medical records of patients with follow-up data since the end of CALM showed that patients with early Crohn’s disease (CD) who achieve endoscopic or deep remission after 1 year of intensive treatment are less likely to have disease progression over a median of 3 years [1]. The results were presented by Dr Thierry Yzet (Amiens University Hospital, France). Participants (n=122) from 31 centres were stratified by outcomes in CALM at 1 year:

The primary outcome was a composite of major adverse outcomes reflecting CD progression: new internal fistula/abscess, stricture, perianal fistula/abscess, CD hospitalisation, or CD surgery since the end of CALM. Median follow-up time from the end of CALM was 3.02 years. Fifty per cent of participants were randomised to the tight control arm. During follow-up, 34 patients (27.9%) had a major adverse outcome. Patients in clinical remission at 1 year did not have significantly lower rates of the composite endpoint (log-rank P=0.15). Patients in endoscopic and deep remission at the end of CALM were significantly less likely to have a major adverse event over time.

Figure 1: Kaplan-Meier estimates of CD disease progression based on endoscopic remission at 1 year [1] 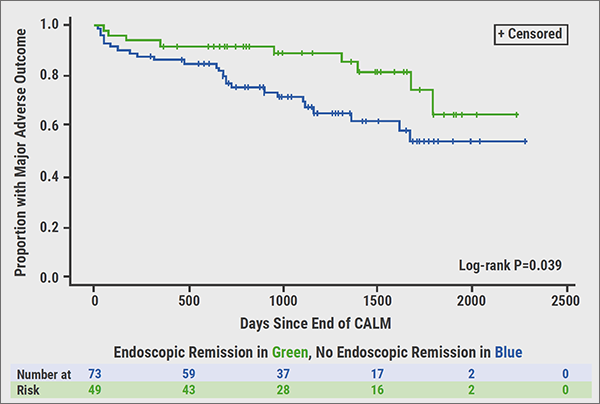 Figure 2: Kaplan-Meier estimates of CD disease progression based on deep remission at 1 year 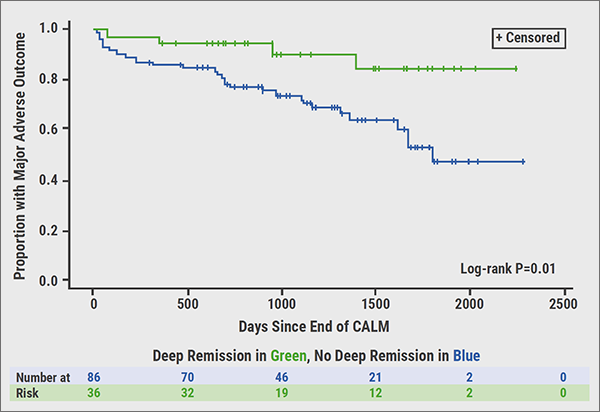 Upadacitinib: data from U-ACHIEVE and CELEST

The right drug for the right patient

Vedolizumab: Results from the GEMINI programme

Ustekinumab as maintenance therapy and with shortened interval

Limited long-term effectiveness and safety of tacrolimus in ulcerative colitis

Relapse after withdrawal of thiopurines

Efficacy and safety of biosimilars