Figure 1: Efficacy of vedolizumab in CD and UC at last follow-up [1] 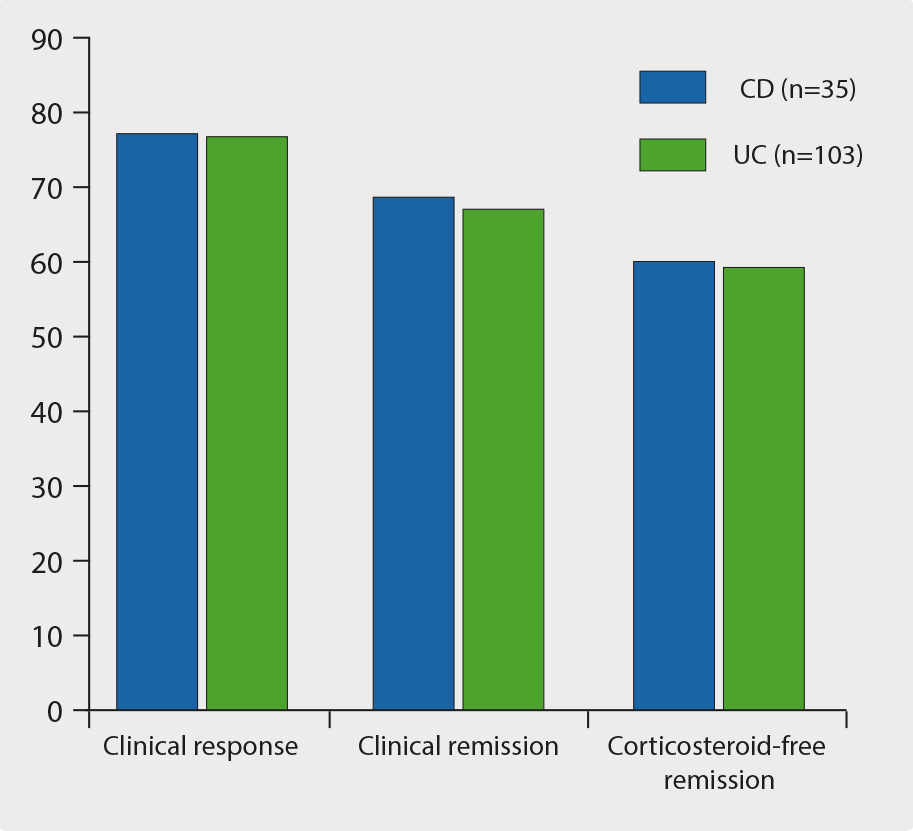 Endoscopic improvement was achieved in 63.7% and mucosal healing in 45.5% of CD patients with available data from baseline till follow-up. In UC, mucosal healing was achieved in 58.5% of patients. Secondary loss of response developed after 39 weeks of follow-up in 10% of the patients who continued treatment at week 14. AEs were reported in 11% of the patients; in 3.3%, this lead to treatment discontinuation.

It was concluded that vedolizumab was effective in inducing clinical remission and response in anti-TNF-naïve patients, with similar response rates in UC and CD. The efficacy of vedolizumab is higher than has been reported in anti-TNF-experienced patients and is comparable to that of anti-TNF biologics in this population.

A post-hoc analysis was done of 421 vedolizumab-naïve patients from the GEMINI long-term safety studies [2]. This showed that almost two-thirds of UC patients and more than half of CD patients persisted with vedolizumab treatment for three years.

Rates of vedolizumab discontinuation due to AEs were low and vedolizumab treatment persistence rates were higher in patients without prior TNF antagonist failure. Vermeire et al. used this de novo cohort from the GEMINI study to validate the long-term effectiveness and favourable safety profile of vedolizumab. The cohort consisted of a population without prior vedolizumab exposure.

These patients were more likely to represent patients physicians see in their daily clinical practice than patients who had participated in randomised controlled trials. These de novo patients (n=421; UC n=190, CD n=231) received vedolizumab every four weeks. Among them, 61% of UC patients and 74% of CD patients had prior TNF antagonist failure. Median disease duration was 5.8 years for UC and 8.3 years for CD, respectively. The number of patients who discontinued vedolizumab treatment during follow-up was 218, the main reason being lack of efficacy in 46% and AEs in 27%.

These data were concluded to support the long-term effectiveness and favourable safety profile of vedolizumab and suggest improved outcomes of vedolizumab treatment in TNF antagonist-naïve patients.