The OPUS registry was set up to collect long-term (five years) real-world clinical practice safety data in patients with moderate-to-severe UC treated with infliximab [12]. This safety profile was compared with that of UC patients treated with conventional therapies. It demonstrated a higher rate of colectomy in infliximab-treated patients. For most patients it became necessary after they discontinued infliximab (≥90 days) and probably was related to a more severe disease at baseline.

The prospective, non-randomised, observational study followed more than 2,000 UC patients in routine practice across 14 European countries. These patients were enrolled to receive treatment with either infliximab or conventional therapies, as determined by their treating physician.

At any time during the study, the patient’s therapy could be changed to any other UC therapy, based on the physician’s clinical judgment. In the intention-to-treat main analysis, Cox proportional hazards models were used to compare time to colectomy for the infliximab and conventional therapies groups. Adjustments were made for baseline covariates of disease severity, smoking history, and other UC medications.

In a separate secondary analysis, colectomy incidence rates were examined using an exposure-adjusted approach based on the timing of exposure to infliximab. Infliximab exposure time was defined as time from first dose to within 90 days after the most recent infliximab dose.

Data concerning 2,239 patients were available. A total of 1,180 patients – including 296 patients who switched to infliximab during follow-up – were enrolled in the conventional therapies group and 1,059 patients in the infliximab group.

Patients selected by their physicians to start on infliximab had more severe disease at baseline (shown, e.g., by their partial Mayo score) than those selected for conventional therapies. A total of 222 patients had colectomy during five years of follow-up. In time-to-event analyses, enrolment in the infliximab group was associated with higher risk of colectomy (HR 3.12; 95% CI 2.25-4.34; P<0.001) than in the conventional therapies group. After controlling for exposure to infliximab, however, incidence rates of colectomy were similar whether exposed or not. Criteria for exposure were <90 days of dosing with infliximab (27.0/1000 patient-years) and for non-exposure, ≥90 days after the most recent dose (22.7/1000 patient-years).

Within the infliximab registry group, 97 of the colectomies occurred during up to five years of follow-up when not exposed to infliximab. The incidence rate was 48.9/1000 patient-years (Table 11).

Table 11: Incidence of colectomy based on timing of exposure to infliximab [12] 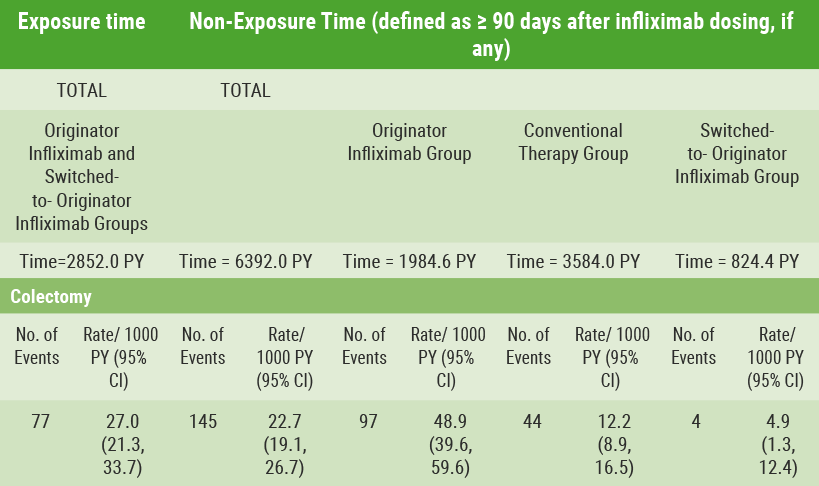