Quiescent disease in the first ten years after diagnosis

In total, all CD patients from this cohort with at least ten years follow-up (age >18 years; diagnosed between 1991 and 2004) were included (n=432). The researchers found that during ten years follow-up after diagnosis, patients experienced 4.2 quarters of active disease on average. In contrast, 29.6% of patients were classified as quiescent, and among these 89.8% never received immunomodulators (IMM) or biologics. Ileocolonic disease location (odds ratio (OR) 0.45; 95% confidence interval (CI) 0.21-0.91) and smoking at diagnosis (OR 0.44; 95% CI 0.26-0.70) were negatively associated with a quiescent disease course. However, surgery at diagnosis (OR 3.02; 95% CI 1.39-6.64) was positively associated. The best prediction model for a quiescent course had an area under the receiver operating characteristic curve (AUC) of 0.72 (P<0.001) at baseline and 0.75 (P<0.001) at six months after diagnosis.

Thus, this first population-based clustering analysis of disease activity patterns in CD showed that a substantial group of patients experience a quiescent disease course during the first ten years after diagnosis, and early clinical markers are only moderately predictive. These findings underline the importance of patient stratification at baseline to prevent under- and overtreatment. Further studies are needed to confirm these findings and to identify better predictive biochemical, molecular, or genetic markers.

Early disease in IBD is defined as disease duration <18 months and no previous use of disease-modifying agents such as IMM or biologics. Covariates are bowel damage, corticosteroid use, disease location, objective signs of inflammation, and clinical symptoms [2].

In many patients a delay occurs between their experience of the first symptoms and diagnosis of IBD. This delay causes (bowel) damage, leading to a higher risk of complications and surgery [3]. Diagnosing early disease is difficult, as the pathophysiology of early disease is different from that of late disease (e.g., cytokine levels) [4]. Even with early diagnosis, the question remains if and which intervention will be successful.

Regarding interventional strategies using thiopurines, the findings have been conflicting so far. A post-hoc analysis by Panés et al. showed that early azathioprine is no more effective than placebo to sustain corticosteroid-free remission in patients with newly diagnosed CD [5]. However, it was more effective in the prevention of moderate-to-severe relapse (CD Activity Index (CDAI) >220): 11.8% for azathioprine vs. 30.2% for placebo (P<0.01). Thiopurines may be useful as they reduce surgery, according to a meta-analysis of ten trials including more than 12,000 patients. The combined hazard ratio (HR) was 0.59 (0.48-0.73) [6].

The REACT study showed that the benefits of early combined immunosuppression for clinical remission were modest and non-significant compared with those of conventional management. Nevertheless, a reduction in major adverse outcomes such as surgery, hospitalisation, or serious disease-related complications was observed [7]. For UC patients, prospective cohorts are needed to evaluate the impact of early disease-modifying therapies and treat-to-target approaches with IMM and biologics [8]. In conclusion, there are convincing arguments in favour of early intervention as well as arguments against early intervention in CD (Table 1) [9,10].

Table 1: Pro and contra arguments for early intervention in CD[9]

The CALM study demonstrated superior endoscopic outcomes when treatment was escalated based on a tight-control algorithm using symptoms and biomarkers, compared with conventional management. However, optimal biomarker cut-offs to predict mucosal healing have not been established [11].

An analysis from CALM by Reinisch et al., investigated the association of endoscopic outcomes with FCP and C-reactive protein (CRP) cut-offs at 48 weeks, in adult patients with CD (n=244), using a chi-square test [12]. Endoscopic outcomes were mucosal healing (CDEIS <4), no deep ulcers, and endoscopic response (CDEIS decrease >5 from baseline). Analysed cut-offs for FCP (<250 or ≥250 μg/g) and CRP (<5 or ≥5 mg/L) were based on criteria for treatment escalation in the tight control group.

The results showed that significantly greater proportions of patients with CRP concentrations of <5 mg/L achieved endoscopic outcomes in CALM. Similar findings were observed even to a greater extent with FCP <250 μg/g. The highest proportion of patients achieved the two endoscopic endpoints when both CRP and FCP were considered (Table 2). 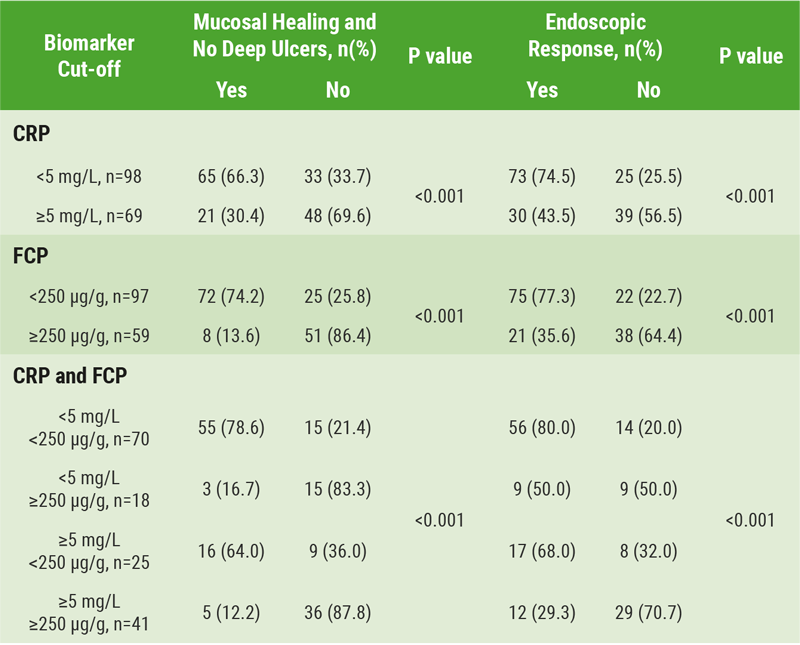 It was concluded that the correlation of biomarker cut-offs with endoscopic outcomes is an important finding for future management of CD. Additional studies are needed to further define the biomarker cut-offs.