Minimising radiation exposure for nephrolithiasis procedures requires the endourologist to make adjustments to limit fluoroscopy time, limit time spent adjacent to the patient, irradiate only to observe motion, and use 'last-image-hold' and 'instant replay' whenever possible.

Prof. Andreas Skolarikos (University of Athens, Greece) provided practical tips and tricks to reduce radiation exposure in both the patient and attending endourologist [1]. Patients with nephrolithiasis are at risk for significant radiation exposure from diagnostic imaging. In addition, fluoroscopy used during surgical treatment of nephrolithiasis also contributes to radiation exposure for patient as well as endourologist. Patients receive even more radiation from surgery than from a non-contrast computed tomography (CT) of the abdomen and pelvis. However, a recent survey on the knowledge on radiation exposure and compliance to wearing protective equipment among endourologists indicated substantial lack of knowledge and awareness regarding their occupational radiation [2]. Nonetheless, compared with interventional radiologists, cardiologists, and vascular surgeons, urologists are exposed by far to the highest levels of radiation, with exposure levels over 18-fold compared to cardiologists [3].

Ionising radiation is an essential part of any urological practice. In general, Prof. Skolarikos said, radiation exposure can be minimised in 2 ways: either by using use no radiation at all or by following the ALARA (as low as reasonably achievable) principles. In the aforementioned survey, only 42% of endourologists were familiar with the ALARA principles [2]. An example of one easy adjustment is the use of ultrasound in percutaneous nephrolithotomy (PCNL) together with fluoroscopy, which reduced the fluoroscopic time and therefore reduced radiation exposure [4].

In urological practice you want to protect the patient, yourself, and the operating personnel. The primary beam interaction with the patient produces scatter radiation that comes to the personnel in the operating theatre. Anything done to reduce patient exposure will likewise reduce the personnel exposure. Some of the tips and tricks shared by Prof. Skolarikos included:

Prof. Skolarikos concluded that urologists and surgical staff require additional training in radiation and radiation exposure. He urged that radiometers should be evaluated monthly. The rules for staff protection have been well described [11], but it is well known that the exposure of staff is considerably lower than the exposure to the surgeon.

Figure: Effect of the distance from the image intensifier to the X-ray source on magnification, dose, X-ray loss, and scatter radiation [1] 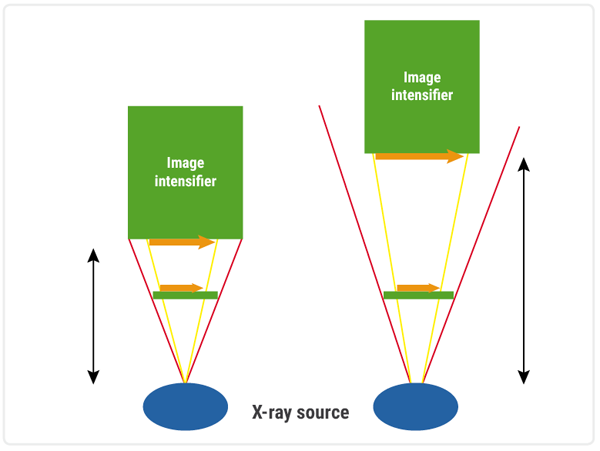 Pressure and temperature: do high-power lasers pose a threat?

Debate: upfront cytoreductive nephrectomy or not?

LUTS in the neuro-urologic patient