Non-Alzheimer’s disease pathophysiology in the elderly

Primary central nervous system pathologies leading to cognitive decline include a variety of only partially known conditions that can coexist to various extents with Alzheimer’s disease (AD) pathology. Availability of biomarkers as well as clinical profiling is still limited. In a lecture, Prof. Philip Scheltens (Amsterdam UMC, the Netherlands) focused on suspected non-Alzheimer’s disease pathophysiology (SNAP) [1].

Prof. Scheltens explained that SNAP is a biomarker-based concept denoting AD-like neurodegeneration in individuals without β-amyloidosis. Its prevalence is 20-30% in cognitive healthy individuals; it accounts for 20-40% of patients presenting to memory clinics. SNAP may be caused by cerebrovascular disorders, mixed pathologies (dementia with Lewy bodies, frontotemporal lobar degeneration), or non-AD neurodegeneration, such as primary age-related tauopathy (PART) and limbic-predominant age-related TDP-43 encephalopathy (LATE).

In the ATN system of the National Institute on Ageing-Alzheimer's Association (NIA-AA), 8 major AD biomarkers are divided into 3 pathophysiology-based binary categories. “A” refers to the value of a β-amyloid biomarker (amyloid-PET or cerebrospinal fluid [CSF] Aβ1-42); “T,” the value of a tau biomarker (CSF phosphorylated tau, or tau-PET); and “N,” biomarkers of neurodegeneration or neuronal injury ([18F]-fluorodeoxyglucose-PET, structural MRI, CSF total tau, or neurofilament light chain).

Prof. Scheltens argued that the concept of SNAP is still useful, but that it is now referred to as “non-AD pathophysiology”. This concept is part of a research framework (see Table) proposed by the NIA-AA to define AD pathologies based on ATN profiles [3]. 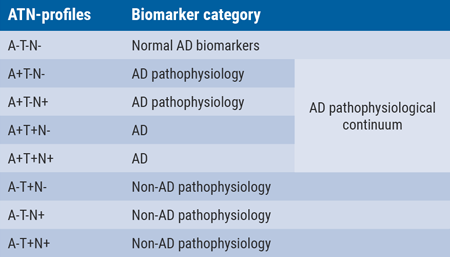 Non-Alzheimer’s disease pathophysiology in the elderly

How genetic testing can contribute to epilepsy management

Prevalence of autoantibodies in epilepsy almost 10%

Extubation after thrombectomy: the sooner, the better

Early edoxaban may be safe after cardioembolic stroke

Migraine as a cyclical functional disorder

Real-world data for erenumab in Germany

Effects of galcanezumab on health-related quality of life

Imaging to evaluate remyelination and neuroprotection

Switching from natalizumab to moderate- versus high-efficacy DMT

Results of compounds in late stages of development

Alemtuzumab efficacy and safety data of over 9 years

Air pollution is a possible risk factor for MS

Eculizumab in NMOSD: the PREVENT study

Efficacy and safety of rituximab in refractory MG corroborated