Depending on the dosing, ligelizumab has displayed more symptom control in chronic spontaneous urticaria [CSU] than omalizumab. In case of re-occurrence of active CSU after stop of therapy, response rates with ligelizumab re-treatment were very encouraging.

Chronic urticaria is a common, mast cell-driven disease with an increasing world-wide incidence [1]. Ligelizumab, a monoclonal anti-IgE antibody that prevents the cascade of allergic reaction by inhibiting the binding of free IgE to mast cells and basophils has higher affinity to IgE than omalizumab [2,3]. A recently published core 2b randomised controlled trial with 382 adult CSU patients, compared response rates of CSU to ligelizumab at different doses to omalizumab and placebo [1].

One of the questions that Dr Marcus Maurer and colleagues set out to answer was how long after a withdrawal of ligelizumab the patients with complete response would experience a loss of efficacy [4]. Attaining complete response was defined as UAS7=0 at week 20. Patients (n=382) were randomised to omalizumab (300 mg), ligelizumab (24 mg, 72 mg, 240 mg), or placebo. Post-treatment monitoring lasted for up to 24 weeks.

Results found that ligelizumab demonstrated a clear dose-response relationship. At doses of 72 mg or 240 mg, the drug induced a fast and sustained symptom control in a greater rate of patients than omalizumab or placebo. Depending on the allocated dosage of ligelizumab, it took a median of 3 (24 mg), 4 (72 mg), or 10.5 (240 mg) weeks until loss of complete response. The median period for omalizumab was 4 weeks and for placebo 1 week.

Good efficacy in case of re-treatment

To further investigate the potential of ligelizumab, an open label, single-arm extension of the core trial was conducted [3]. Included patients had signs of active CSU after a wash out phase of 16 weeks. The following treatment phase with 240 mg ligelizumab lasted for 52 weeks; follow-up was done until week 104. At week 4, the re-treatment resulted in a complete resolution of symptoms in a week according to the Urticaria Activity Score (UAS) 7=0 of 36.9% of patients at week 4, 62.4% at week 20, and 75.8% at week 52 (see Figure). The respective cumulative response rates of well-controlled symptoms with UAS ≤ 6 were 58.7%, 76.8%, and 84.2%, respectively.

In summary, patients experiencing relapse after the end of treatment had similar or yet higher response rates in the extension phase than under the preliminary treatment in the core study. Two phase 3 trials investigating efficacy and safety of ligelizumab 72 mg and 120 mg every 4 weeks for CSU patients are ongoing.

Figure: Kaplan-Meier plot of weeks until achievement of UAS7=0 in the 2 b core study and the 1-year extension trial [3] 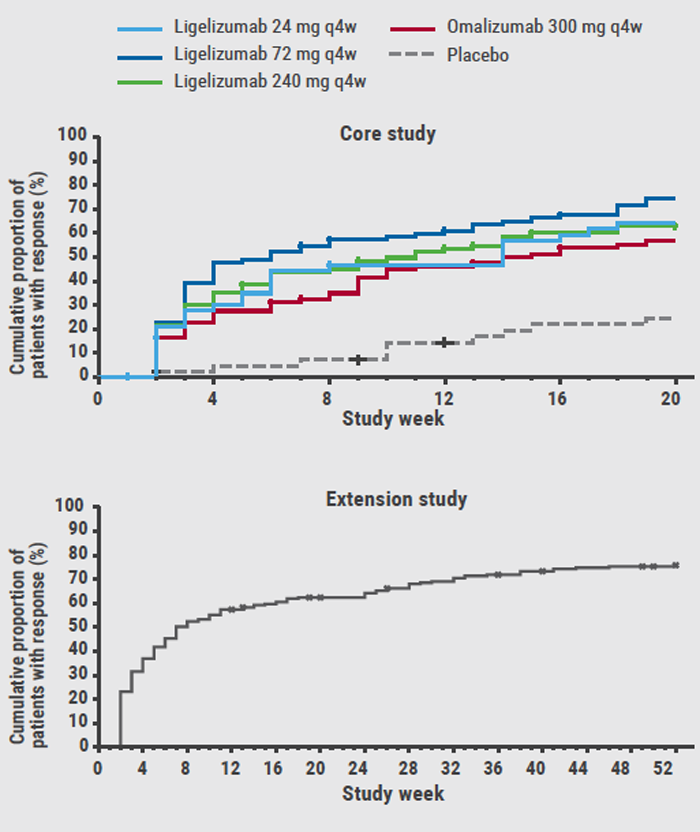