In addition to skin clearance, baricitinib in combination with topical corticosteroid (TCS) showed to be particularly effective in pruritus reduction and improvement of sleep in adult patients with moderate-to-severe atopic dermatitis (AD) [1].

Baricitinib is a selective Janus kinase (JAK) 1 and 2 inhibitor that has previously shown to be effective in moderate-to-severe AD when given as monotherapy. The BREEZE-AD7 study is the first phase 3 study testing the efficacy of a JAK inhibitor in combination with low- and moderate-potency TCS therapy. “I think the BREEZE-AD7 study is important because it allows to look more into the real world where we use a systemic drug together with TCS,” said Prof. Kristian Reich (University Medical Center Hamburg-Eppendorf, Germany).

The study included 329 adult patients with moderate-to-severe AD for ≥ 1 year. Participants were treated in 3 arms: either placebo and TCS, or baricitinib in a dose of 2 or 4 mg and TCS. Primary study endpoint was the Investigator´s Global Assessment (IGA) of clear or almost clear (0/1) with an at least 2-point improvement from baseline. Secondary endpoints included a change in Eczema Area and Severity Index (EASI), itch improvement in Numeric Rating Scale (NRS) score, and improved sleep disturbances.

Baricitinib plus TCS showed an early onset of response, but only the 4 mg dose was significantly more effective after 16 weeks: 30.6% of patient reached the primary endpoint compared with 14.7 in the placebo plus TCS group (P≤0.01; see Figure). At week 16, nearly half of the patients (47.7%) taking the higher dose reached an EASI 75 response.

“We have underestimated the importance of itch and pain in AD and their effect on sleep,” said Prof. Reich. Significant improvement in itch was detected as early as week 2 for 4 mg and week 3 for 2mg. After 16 weeks, itch was reduced by 43.4% in patients treated with 4 mg baricitinib and TCS. Therapy also led to a quick improvement of sleeplessness: after 16 weeks, more than 60% of nights were not disrupted in the high-dose group.

The combination of baricitinib and TCS also led to a fast improvement of skin pain: after 16 weeks, nearly 50% of patients reached a skin pain improvement in a NRS of ≥ 4 points. Not surprisingly, these results translated into a dramatic impact on quality of life: at 16 weeks, 23.4% of patients treated with the high dose reached a DLQI 0/1 response, which means that quality of life is no longer impaired by the disease.

A post-hoc analysis showed a dose-dependent increase of TCS-free days from baseline to week 16: 32.9% TCS-free days were gained in the high-dose group. In 16 days, 137 g less TCS was used in this group.

“In 16 weeks, we saw no difference in serious adverse events between the groups. Of course, we have to see longer term data to judge the safety,” said Prof. Reich. Acne was observed, which has to be monitored in the future. One pulmonary embolism was reported in the high-dose group. In conclusion, baricitinib may be another promising novel oral treatment option for patients with moderate-to-severe AD, which seems to be strongest in itch and sleep disturbance reduction.

Figure: 4 mg Baricitinib resulted in a significantly higher percentage of patients that achieved an at least 2-point improvement from baseline of IGA 0/1 compared to placebo + TCS (primary endpoint) [1] 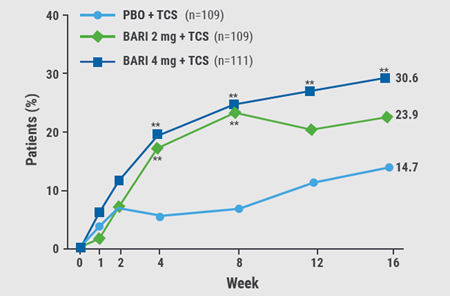