Biologics and cytokine blockers are increasingly used in children and adolescents with moderate-to-severe psoriasis and atopic dermatitis (AD). Data shows that they cause less side effects than systemic conventional therapies [1].

In adults, biologics targeting specific cytokines are effective, well tolerated, and a safe alternative to conventional systemic treatments. At present, 3 biologics (i.e. etanercept, adalimumab, and ustekinumab) are approved in paediatric psoriasis and dupilumab is approved in AD.

TNF-blockers and ustekinumab showed similar efficacy and tolerability compared with trials in an adult population [2-4]. In the meantime, long-term data from open-label extensions with TNF-blockers showed reassuring results. After 5 years, etanercept was still well tolerated and efficacy was maintained in those who remained in the study for up to 264 weeks [5]. There were no opportunistic infections or malignancies. Similarly, 52-week data from adalimumab showed no malignancies but nasopharyngitis and headache was reported in > 20% of patients and injection-site reactions in 3.7% [6,7]. One study included not only patients with psoriasis but also with polyarticular juvenile idiopathic arthritis, enthesitis-related arthritis, and Crohn's disease. The safety profile was generally similar across indications [7].

Real-world studies can provide further insight into the true benefit of a therapy beyond randomised controlled trials with their strict inclusion criteria. A retrospective review was conducted on the use of systemic treatments for moderate-to-severe psoriasis in children in 20 centres in the USA and Europe. All children with moderate-to-severe psoriasis who used systemic medication or phototherapy for at least 3 months were included [8]. Mean duration of treatment was 20 months with biologics and 18.7 months with methotrexate. In this review, 270 children were treated with methotrexate and 106 with biologics (primarily etanercept). Medication-related adverse events occurred less often with biologics than with methotrexate. There were less gastrointestinal side effects, less laboratory issues, and less adverse events leading to treatment discontinuation, but more infections with biologic therapy (see Figure) [8].

A second real-life study was performed in France, including 134 children with moderate-to-severe psoriasis in 30 centres [9]. The mean age of onset of treatment was 7.2 years and the mean age at onset of treatment with a biologic 13.2 years. Altogether, the study observed 232 years of cumulative treatment. During this period, 7 serious adverse events were documented: 3 serious infections, 2 cases of weight gain, 1 psoriasis flare, and 1 malaise [9]. Ustekinumab had the best drug survival outcome in this study. Similarly, dupilumab was equally effective and had a similar safety profile in paediatric patients with moderate-to-severe AD compared with adult patients [10]. “Basically dupilumab has the same side effects in children as in adults, including conjunctivitis,” said Prof. Marieke Seyger (Radboud University Nijmegen, the Netherlands). 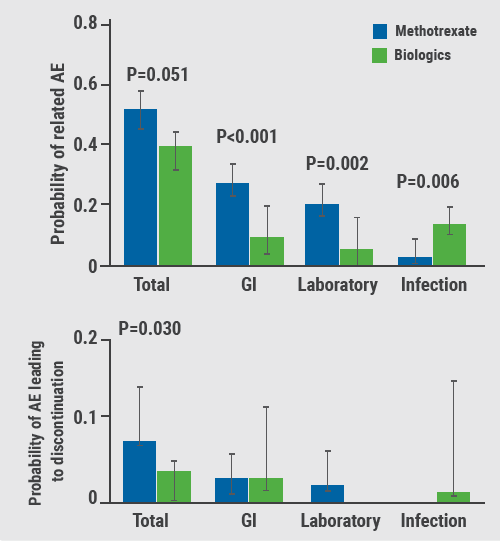