Results of the CORTICO-COP trial that administering systemic corticosteroid prednisolone only on days when blood eosinophil count was at least 0.3 x 109 cells/L in patients with chronic obstructive pulmonary disease (COPD) significantly reduced systemic corticosteroid exposure; although this strategy did not confer a benefit in terms of the number of days alive and out of hospital.

All patients received 80 mg of intravenous methylprednisolone on the first day of admission. From the second day onwards, patients assigned to the eosinophil-guided group were given 37.5 mg of oral prednisolone daily, up to a maximum of 4 days, when their blood eosinophil count was at least 0.3 x 109 cells/L. On days where the eosinophil count did not meet this threshold, prednisolone was not administered. If a patient was discharged during the treatment period, a discharge prescription for the remaining days within a 5-day period was based on the last measured eosinophil count. The standard therapy group received 37.5 mg of oral prednisolone daily from the second day for 4 days. The primary outcome measure was the number of days alive and out of hospital within 14 days after recruitment.

Researchers found that there was no between-group difference for days alive and out of hospital within 14 days after recruitment (P=0.34). Treatment failure at 30 days was also comparable between groups (P=0.90). At 30 days of follow-up, 6% of patients in the eosinophil-guided group and 4% of patients in the control group had died (P=0.43). However, the median duration of systemic corticosteroid therapy was lower in the intervention group (P<0.0001, see Figure). This study therefore shows that although eosinophil-guided therapy does reduce systemic corticosteroid exposure, this strategy may not confer a benefit in terms of the number of days alive and out of hospital. Further studies are needed in assessing eosinophil-guided therapy and other long-term outcomes.

Figure: (A) Proportions of patients on OCS; (B) Mean duration of OCS use. Data based on [2] 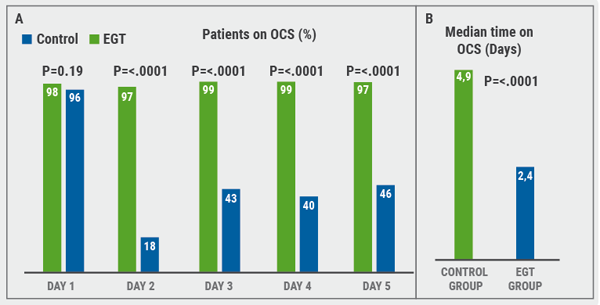 Aspergillus and early cystic fibrosis lung disease: does it need to be treated?

A randomised controlled trial of a smoking cessation smartphone application