61st Annual Meeting & Exposition of the American Society of Hematology

In this single-institution study, 154 patients whose disease was refractory to IFN in 1999/2000 were switched to 400 mg imatinib. The majority of patients passed away (36%), were lost to follow-up (29%), or switched to a different tyrosine kinase inhibitor (37%). The purpose of this study was to evaluate the long-term effects of imatinib on CML disease response. Dr Vasquez reported the available intention-to-treat responses for 63 patients, with a median follow-up of 232 months.

In conclusion, the introduction of imatinib into the practice of treating IFN-refractory CML 20 years ago afforded long-term survival for many patients with remarkable improvements in both clinical and molecular parameters.

Figure: 20-Year survival of CML partients on imatinib. Modified from [1] 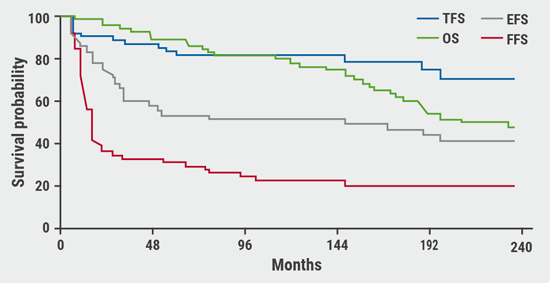 Anti-CD70 is safe with hypomethylating agents in AML

Rivaroxaban is safe and effective for paediatric venous thromboembolism

Aspirin plus DOAC is not better than a DOAC alone