Early apixaban safe as secondary prevention of stroke from AF

The study intended to determine the optimal timing of anticoagulation initiation after atrial fibrillation (AF)-induced acute ischaemic stroke (AIS), which is associated with larger infarct volumes. Previous landmark randomised trials have all waited weeks or months to begin anticoagulation after a stroke, but this trial aimed to establish the clinical value of early intervention. To that end, the safety and efficacy of early anticoagulation were evaluated based on stroke size, secondary prevention of ischaemic stroke, and risks of subsequent haemorrhagic transformation.

Patients were randomised 1:1 to receive early apixaban (n=41) at day 0–3 for transient ischaemic attack (TIA), day 3–5 for small-sized AIS (<1.5 cm), and day 7–9 for medium-sized AIS (≥1.5 cm but less than a full cortical territory), or warfarin (n=47) at 1 week post-TIA or 2 weeks after a small or medium stroke (Figure). Patients with large AIS were excluded. Enrolment was suspended prematurely after a 2019 guideline update recommended direct oral anticoagulants over warfarin in AF, excepting valvular disease. 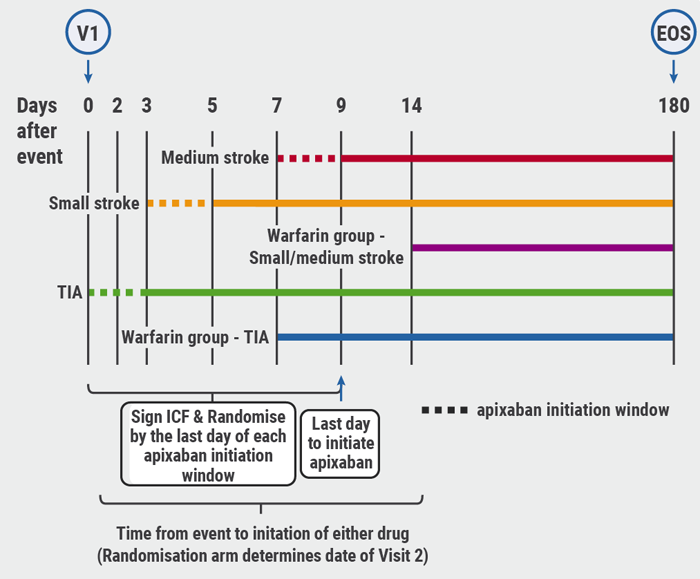 At 180 days of follow up, although not statistically significant, early intervention with apixaban resulted in empirically fewer recurrent ischaemic strokes, TIAs, or fatal strokes (19.5% vs 27.7%; P=0.46). Early apixaban use was not associated with increased risk of intracranial bleeding or any of the other secondary outcomes. Dr Labovitz concluded that the early use of apixaban is safe in this patient population and may potentially be associated with improved outcomes, although further studies are warranted.

Introduction to the AHA 2019 Conference Report

Phase 3 BETonMACE trial did not meet its primary endpoint

Immediate coronary angiography after cardiac arrest does not improve survival

Full GALILEO results: Why did rivaroxaban fail after TAVR?

New guidelines on the prevention of cardiovascular conditions

Early apixaban safe as secondary prevention of stroke from AF

Carvedilol does not improve exercise performance in Fontan patients

DAPA-HF: Dapagliflozin also good for heart failure patients without diabetes, of any age, or any health status