The primary composite endpoint was reached by 35.5% of vericiguat patients and 38.5% of placebo patients (HR 0.90; 95% CI 0.82-0.98; P=0.019), a 10% lower risk of cardiovascular death or HF hospitalisation (see Figure). However, the individual component analysis showed that these data were primarily driven by the reduction of total hospitalisations for heart among patients taking vericiguat (HR 0.91; 95% CI 0.84-0.99; P=0.02). These data indicate an absolute risk reduction of 4.2 per 100 patient-years in the vericiguat arm. Roughly 24 patients with chronic HFrEF would need to be treated to prevent 1 cardiovascular death/HF hospitalisation.

No significant difference in cardiovascular death was observed: 12.9% for the vericiguat arm versus 13.9% for the placebo arm (HR 0.93; 95% CI 0.81-1.06; P=0.269). Regarding safety, vericiguat titrated to 10 mg was generally safe and well-tolerated, although reports of hypotension and syncope were numerically higher with vericiguat.

In conclusion, vericiguat may represent an expansion of options for patients with a recent worsening HF event, especially because it is a once-daily oral medicine, easy to titrate, generally safe and well tolerated, and does not require monitoring of renal function or electrolytes. These data are particularly relevant because hospitalisation for worsening HF represents a “major inflection point” in the natural history of the condition, which is characterised by a marked change in the risk of future hospitalisations and mortality. To date, no prior therapies have attenuated this risk, but vericiguat might be the first to alter the natural history of HF after a patient has had a worsening event. Furthermore, this trial represents the feasibility of modulating the bioavailability of NO as a novel therapeutic approach for HF, as well as potentially other cardiovascular conditions characterised by insufficient NO-sGC–cGMP signalling. 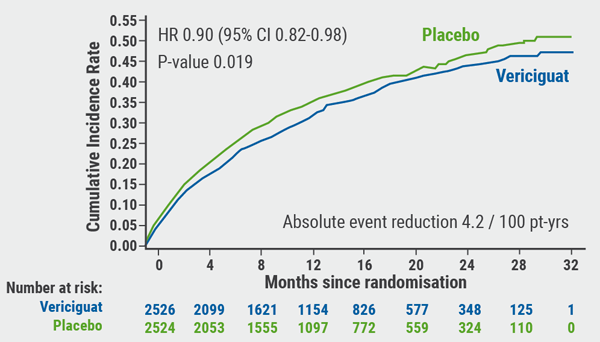