New data from a post-hoc analysis of the TWILIGHT trial showed that, in patients who underwent a complex percutaneous coronary intervention (PCI) , ticagrelor monotherapy after an initial 3 months of dual antiplatelet therapy (DAPT) with ticagrelor plus aspirin was associated with significantly lower clinically relevant bleeding without increasing the risk of ischaemic events compared with continuing the DAPT. The TWILIGHT-COMPLEX sub-study was presented by Prof. George Dangas (Icahn School of Medicine at Mount Sinai, USA) and published simultaneously [1,2].

The original randomised, double-blind, placebo-controlled TWILIGHT trial recently determined that dropping aspirin after 3 months of DAPT with ticagrelor following PCI is associated with lower rates of bleeding but no increased risk of death, myocardial infarction (MI), or stroke [3]. The aim of this sub-study was to evaluate the effect of ticagrelor monotherapy versus ticagrelor + aspirin in patients undergoing complex PCI, defined as a combination of high-risk angiographic and procedural features.

All participants underwent 1:1 randomisation to either ticagrelor + placebo or to ticagrelor + aspirin and had a 1-year follow-up. All patients received aspirin before randomisation for the first 3 months following PCI. Like the TWILIGHT trial, the primary endpoint of this post-hoc analysis was Bleeding Academic Research Consortium (BARC) 2, 3, or 5 bleeding, and investigators also assessed for a composite ischaemic endpoint of all-cause death, MI, or stroke.

Table. Bleeding and ischaemic events 1 year after randomisation. Modified from [2] 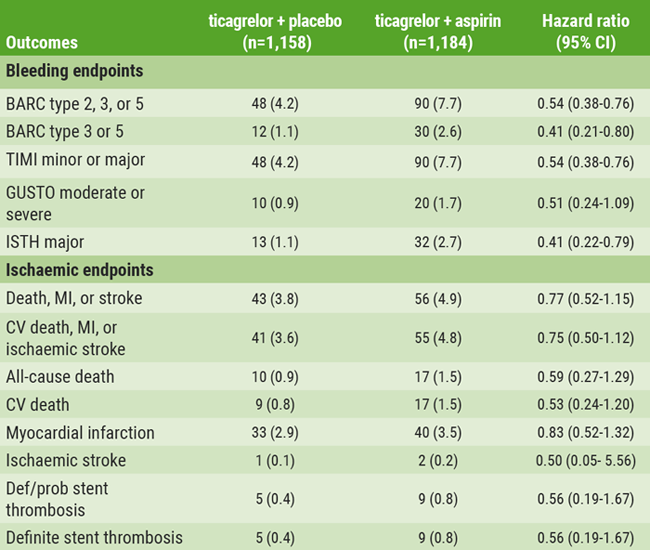