Prof. Michael Böhm (Saarland University Medical Center, Germany) presented the international, prospective, single-blinded, sham-controlled trial, which was designed to assess the efficacy of renal denervation in the absence of antihypertensive medications [1]. The findings were simultaneously published in The Lancet [2].

This trial was instigated based on observational data suggesting that catheter-based renal denervation significantly reduced blood pressure. Following a positive pilot trial, the SPYRAL PIVOTAL-SPYRAL HTN-OFF MED trial was powered to evaluate the efficacy of catheter-based renal denervation in the absence of medications. Participants (n=331) from 46 sites had a systolic blood pressure (average over 24 hours) between 140 -170 mmHg and had either never taken any blood pressure-reducing medications or had discontinued those medications for at least 3 weeks prior to study entry. Characteristics were similar between both groups; 67% were men, the average age was 53, and the average body mass index was 31. Patients were randomised to either renal denervation (n=166) or a sham procedure (n=165), during which a catheter was inserted and angiography was performed.

Results from a companion study, the SPYRAL HTN-ON MED trial, which is testing the safety and effectiveness of renal denervation in patients who are taking up to 3 blood pressure-reducing medications, are expected at the end of 2021.

Figure: Primary analysis of blood pressure at 3 months over 24-hours at home or the office [1] 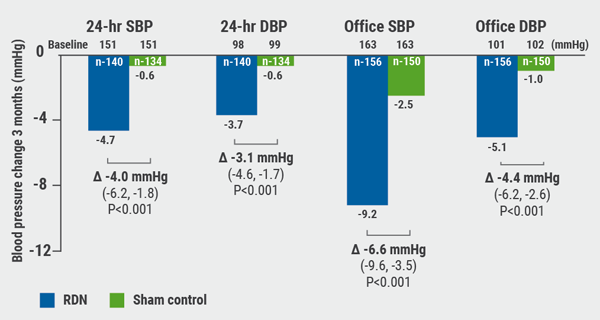