After 10 years of follow-up, data showed that using the radial artery rather than the saphenous vein for a second bypass was associated with a statistically significant decrease in the combined rate of death, heart attacks, and revascularisation procedures.

Prof. Mario Gaudino (Weill Cornell Medicine, USA) presented the results of the RADIAL study, which was a patient-level combined meta-analysis of 5 clinical trials held in Australia, Korea, Italy, Serbia, and the United Kingdom [1]. The rationale of this combined analysis stems from the fact that the use of >1 arterial grafts for coronary-artery bypass grafting (CABG) has not been widely adopted despite current guidelines recommendations. It is generally accepted that radial artery grafts have a better patency rate compared with saphenous vein grafts. Yet, evidence has shown that patients frequently receive saphenous vein grafts in addition to an internal thoracic artery graft to the left anterior descending coronary artery [2]. "The choice of an artery or a vein to create the second bypass is one of the most important unresolved questions in contemporary bypass surgery," Prof. Gaudino said.

For the RADIAL meta-analysis, the investigators combined the results from 5 trials in which patients receiving bypass surgery were randomly assigned to get a second bypass from either the radial artery (n=534) or the saphenous vein (n=502). Participants had an average age of 67 years at the time of surgery; 70% were male. The primary endpoint was the combined rate of death, heart attack, or need for a second procedure to treat the same artery. The co-primary endpoint was the combined rate of death or heart attack.

In 2018, this team previously reported in the New England Journal of Medicine that after an average 5-year follow-up, patients who received radial artery versus saphenous vein bypasses had significantly fewer heart attacks and repeat revascularisation procedures, although the death rate was similar in the 2 groups [3]. The current study extends that study by an additional 5 years of follow-up from the same patient cohorts. At a median of 10 years follow-up, patients who received radial artery bypasses had a 23% reduced risk of experiencing the primary or secondary endpoint event when compared with the saphenous vein group (HR 0.77; 95% CI 0.63-0.94). Use of the radial artery was associated with a 27% reduction in deaths (HR 0.73; 95% 0.61-0.88; see Figure), a 26% reduction in heart attacks, and a 38% reduction in repeat procedures. In a subgroup analysis, females had better survival with radial artery grafts compared with saphenous vein grafts (HR 0.51; 95% CI 0.36-0.72) than males (HR 0.84; 95% CI 0.68-1.05).

Prof. Gaudino concluded that although the results from RADIAL are a pooled analysis of several small trials rather than 1 large trial, the ongoing ROMA trial will hopefully confirm these data in a larger and more homogenous setting. ROMA aims to test whether outcomes are better for patients who receive 2 or more arterial bypasses compared with patients who receive just 1 in a cohort of 4,300 patients. Initial results are expected in 2025. 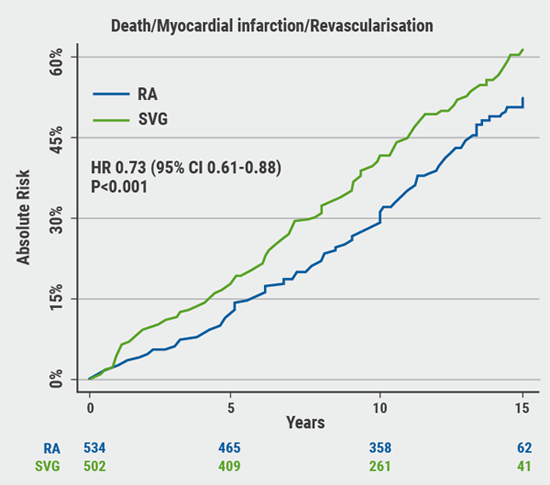