After surgical or mitral valve replacements or repair, 3 months of edoxaban was non-inferior to warfarin for preventing thromboembolism and major bleeding.

Dr Geu-Ru Hong (Yonsei University College of Medicine, South Korea) presented the results of the open-label, parallel group, randomised Korean ENAVLE study, which aimed to explore the efficacy of edoxaban in patients after mitral valve repair or bioprosthetic valve implantation [1]. Dr Hong pointed out that 3 months of warfarin administration after surgical or transcatheter valve therapy is common practice in Korea. The problem is that a Korean diet typically includes high levels of vitamin K that can interfere with the efficacy of warfarin. Thus, the investigators in this trial sought to identify an alternative among the direct oral anticoagulants (DOACs).

The primary efficacy endpoint was the occurrence of thromboembolic and any thrombus at repaired ring or bioprosthetic valves at week 12. Patients (n=220) were randomised, 5 to 9 days after surgical aortic or mitral valve replacement or repair, to receive edoxaban (60 mg or 30 mg once daily; n=110) or warfarin for 3 months (standard care; n=110). Baseline characteristics were well balanced; both arms had similarly high levels of hypertension, hyperlipidaemia, and/or atrial fibrillation. Outpatient clinic visits occurred at 2, 4, and 12 weeks. Echocardiography and CT scans were performed during the final visit at 12 weeks.

In total, 4 patients from the warfarin group and 0 patients in the edoxaban group experienced a primary outcome event. Additionally, there were 3 ISTH bleeds with edoxaban versus 1 with warfarin. Dr Hong noted that a higher risk for gastrointestinal bleeding was observed in the edoxaban group, which may warrant further consideration. Session co-moderator Dr Martin Leon (New York Presbyterian Hospital, USA) summarised: “If we are going to change the guideline recommendation and begin using a DOAC post-valve therapy, we need more data. We need larger numbers of patients to be assured of safety, and to be at least somewhat confident that there really is an efficacy benefit relevant to no therapy, which is generally the standard in the United States.” 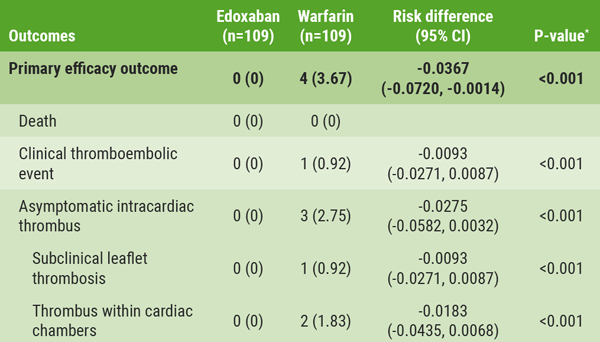