Two landmark trials comparing transcatheter aortic valve replacement (TAVR) with surgical aortic valve replacement (SAVR) in low-risk patients have shown promising results. The PARTNER 3 trial demonstrated that TAVR was superior to SAVR with regard to the reduction of death, stroke, or rehospitalisation at 1 year [1]. Results from the Evolut Low Risk trial showed that TAVR with the self-expanding CoreValve was non-inferior to SAVR [2].

The randomised, parallel PARTNER 3 trial aimed to evaluate TAVR compared with SAVR in low-risk patients with symptomatic severe aortic stenosis. A total of 1,000 patients were enrolled in the study with a median follow-up of 1 year. Mean patient age was 73 years, 30% of patients was female, and 31% had diabetes mellitus. The mean Society of Thoracic Surgeons (STS) risk score was 1.9% (score <4% denoted ‘low-risk’, with higher scores indicating a greater risk of death within 30 days after surgery). The inclusion and exclusion criteria are outlined in Table 1. Primary endpoint of the study was a composite of death from any cause, stroke, or rehospitalisation at 1 year. Patients who were undergoing aortic valve replacement were randomised to TAVR using the SAPIEN 3 valve (n=503) or SAVR (n=497). 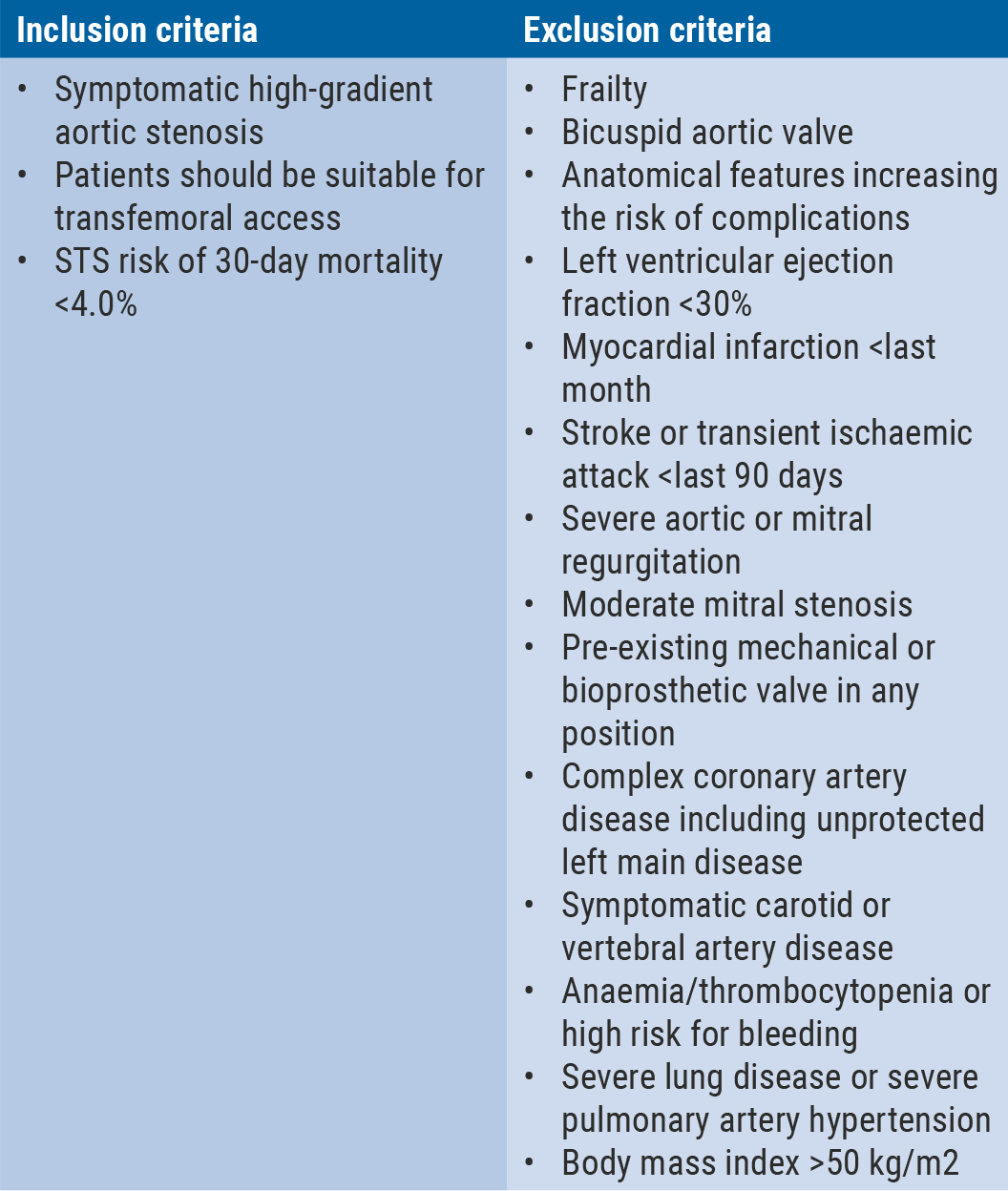 The results showed that 8.5% of patients in the TAVR group vs 15.1% of patients in the SAVR group (P<0.001 for non-inferiority and P=0.001 for superiority) experienced all-cause mortality, stroke, or rehospitalisation that was related to the procedure, valve, or heart failure at 1 year. These findings were similar in all prespecified subgroups. The secondary outcomes of PARTNER 3 are outlined in Table 2. 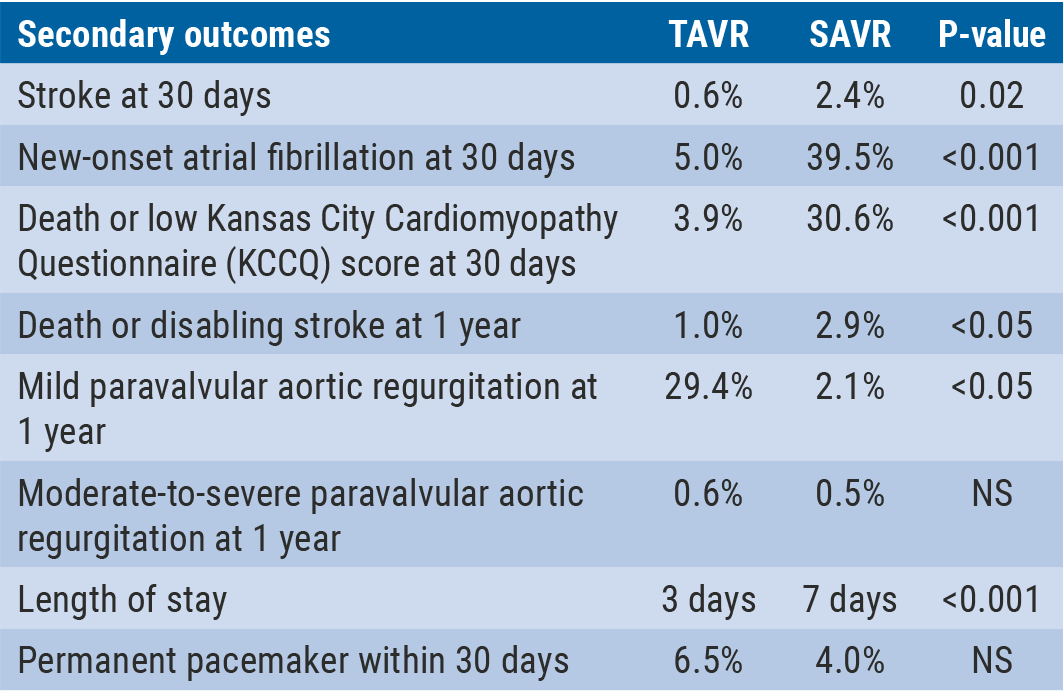 Although these results are very encouraging and make TAVR a realistic possibility for a much larger group of patients, the study did have some limitations, including the follow-up of only 1 year. Therefore, longer follow-up is required to assess long-term structural valve deterioration, particularly in a risk category where valve durability will be of greater importance.

Another landmark TAVR trial in low-risk patients was the Evolut Low Risk trial, assessing safety and efficacy of TAVR with the self-expanding CoreValve compared with SAVR [2]. A total of 1,403 patients were randomised 1:1 to either TAVR (n=725) or SAVR (n=678). Almost two thirds received the self-expanding CoreValve Evolut while 22.3% received the third-generation Evolut PRO. Follow-up was 1 year, mean age of the patients 74 years, and 35% of the population was female. In order to be included in the study, patients needed to have severe symptomatic aortic stenosis, their anatomy needed to be suitable for TAVR or SAVR, and the STS Predicted Risk of Mortality (PROM) score ≤3%. Those who had a contraindication for the placement of a bioprosthetic valve, a bicuspid valve, or a known hypersensitivity or contraindication to all anticoagulation/antiplatelet regimens were excluded from the study. The median STS PROM score was 1.9%, and 13% of patients had had a previous percutaneous coronary intervention. Previous coronary artery bypass grafting had been performed in 2.2%, 11% had cerebrovascular disease, 8% had peripheral artery disease, and mean left ventricular ejection fraction was 61%. 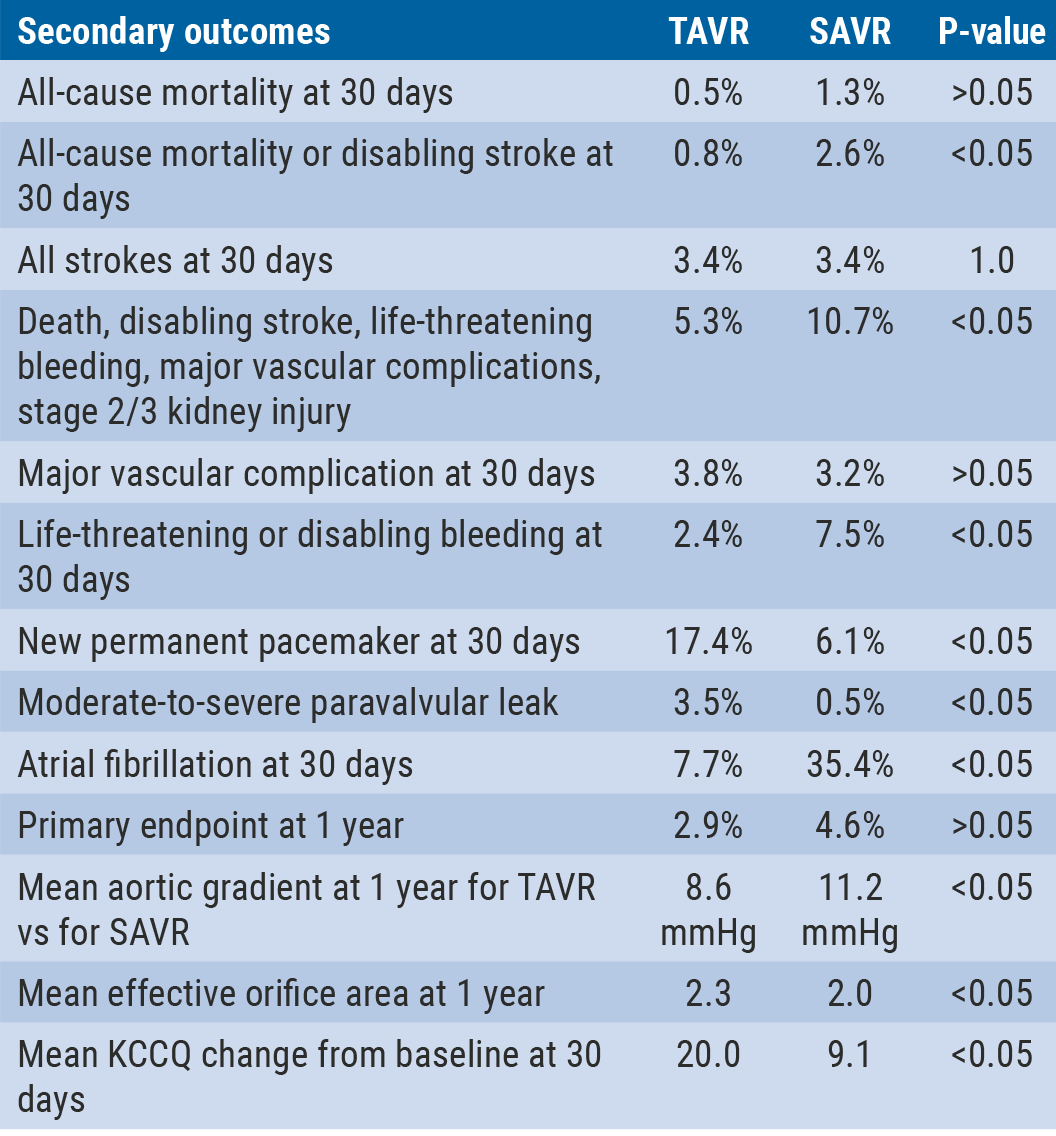 These findings suggest that TAVR with the self-expanding CoreValve Evolut is non-inferior to SAVR with regard to the primary endpoint of mortality/disabling stroke at 24 months for the treatment of severe symptomatic aortic stenosis in low-risk patients. However, some outcomes were higher on TAVR, such as the need for a permanent pacemaker – as was the case in the PARTNER 3 trial – and moderate-to-severe paravalvular leak.

Combining the Evolut Low Risk and PARTNER 3 trial findings, the results indicate that low surgical risk patients do just as well and perhaps even better if they are treated with TAVR instead of SAVR over 2 years of follow-up. The researchers clearly stated that longer follow-up is needed to be able to assess the impact of greater pacemaker insertion rates in the long-term as well as evaluating the risk of subclinical leaflet thrombosis and structural valve degeneration.