The retrospective study of obese non-valvular atrial fibrillation (AF) patients who initiated apixaban, dabigatran, rivaroxaban, or warfarin between January 2013 and September 2015 showed that there is no difference between these DOACs with regard to stroke/systemic embolism (SE) rates when compared with warfarin [11]. Apixaban had a lower rate of major bleeding but it was not significantly different for dabigatran or rivaroxaban in comparison to warfarin.

These results, presented by Dr Steven Deitelzweig (Ochsner Health System, USA), were derived from the ARISTOPHANES population and pooled CMS Medicare data with 4 US commercial claims databases. This covers >180 million beneficiaries annually (approximately 56% of the US population). A total of 62,143 obese patients (19.3 %) with non-valvular AF were included: 13,130 (21.1%) on apixaban, 5,349 (8.6%) on dabigatran, 20,278 (32.6%) on rivaroxaban, and 23,386 (37.6%) on warfarin. Propensity score matching was used to balance baseline characteristics between patients prescribed each DOAC and warfarin: apixaban (n=10,649)-warfarin (n=10,649), dabigatran (n=4,808)-warfarin (n=4,808), and rivaroxaban (n=14,527)-warfarin (14,527). Before propensity score matching, warfarin patients were the oldest and had the highest CCI, CHA2DS2-VASc, and HAS-BLED scores compared with DOAC patients. The mean follow-up time ranged between 6 and 8 months. Mean ages were 71, 69, and 71 years for the apixaban-warfarin, dabigatran-warfarin, and rivaroxaban-warfarin cohort pairs, respectively. The mean CHA2DS2-VASc scores were 3.9, 3.7, and 3.9 for the apixaban-warfarin, dabigatran-warfarin, and rivaroxaban-warfarin cohort pairs, respectively. The results are outlined in the Table below. 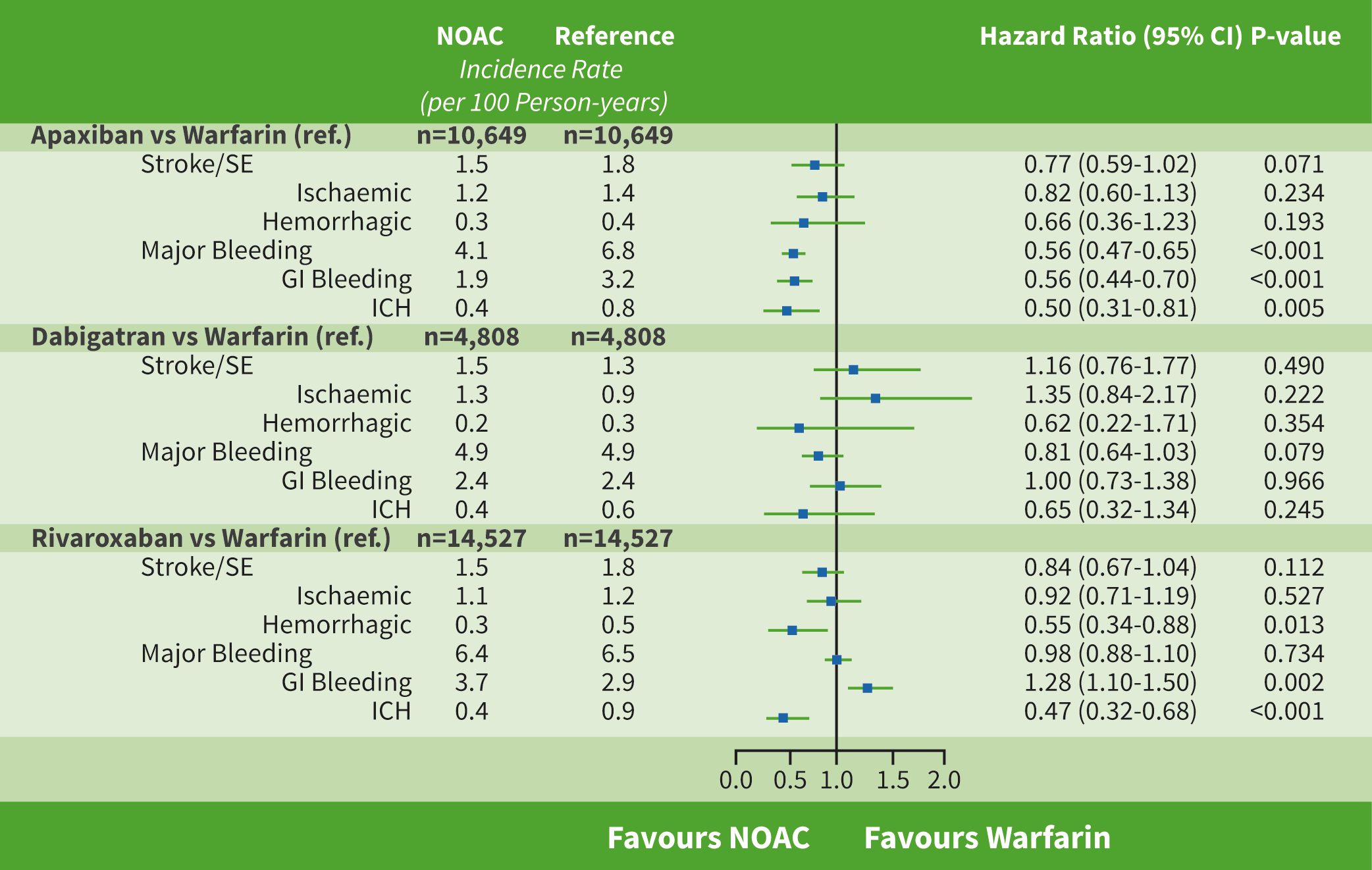 Limitations of the study include propensity score matching being conducted between each cohort pair, which means the results are not comparable across all matched populations. Also, only associations could be concluded from this study as there are potential residual confounders such as over-the-counter use of aspirin or warfarin treatment dose change.